The New Mexico Borderplex and Trade with Mexico

New Mexico has long been a critical hub for the flow of goods into the United States (U.S.) from Mexico and Latin America and subsequently into major U.S. and international markets. The bi-national Borderplex plays a large part in this success. The Borderplex is home to over 2.4 million people, in three states, and two countries and New Mexico is at the crossroads. The Borderplex region spans across El Paso, Santa Teresa, and Las Cruces and borders with Juarez, Mexico.  This presents a truly unique opportunity for companies looking to locate in New Mexico and still benefit from the advantages that the Borderplex region offers. As companies reassess their global strategies, the Borderplex region continues to be an important region for companies’ first U.S. locations.

The Borderplex is home to over 2.4 million people across 3 states and 2 countries.

Growth in Exports
to Mexico

In 2019, New Mexico surpassed all other states with a 68% growth in exports to Mexico and a 31% increase in global exports.

New Mexico has 3 border crossing with Mexico in the state including the fastest crossing in the region – Santa Teresa.

As the most modern port in the Paso del Norte Region, Santa Teresa’s Port of Entry has the fastest commercial crossing of the entire Juarez-El Paso Customs district. There were 114,921 commercial crossings in 2017 and more than 50% of New Mexico’s $3.6 billion in total exports were transported through the Santa Teresa crossing. The port has become a key asset to companies that have located in New Mexico and need access to Mexico.

No crossing fees are charged at the Santa Teresa Port of Entry and it is the designated port in the El Paso Region for oversized loads and heavy machinery exports/imports. The Santa Teresa overweight cargo zone allows carriers to carry up to 96,000 lbs. of a reducible load within a 12-mile radius of the Santa Teresa and Columbus Ports of Entry and has a $250 annual per truck permit.

Santa Teresa offers world-class logistics infrastructure with rail access provided by both Union Pacific railroads and BNSF. It is home to Union Pacific’s Santa Teresa Intermodal Facility, a $500 million state-of-the-art facility, one of Union Pacific’s largest in the nation. This facility facilitates fast, direct connections to ports in LA/Long Beach and Houston and has helped make the Santa Teresa area a strategic focal point for rail shipments in the southwestern United States. 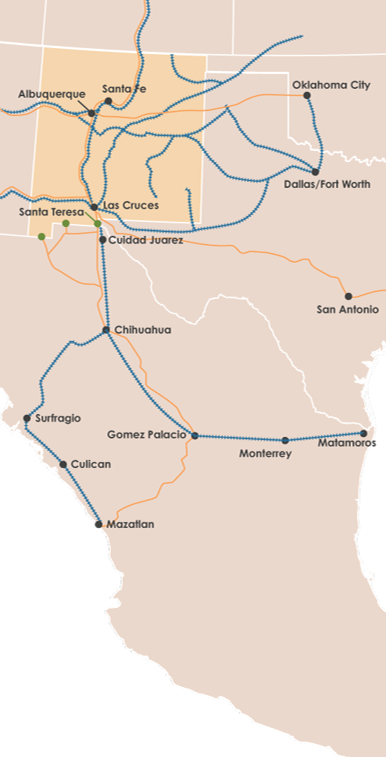