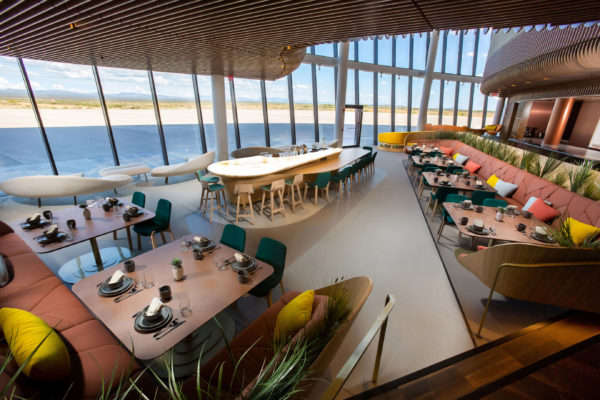 Company pilots flew Eve on Monday from the Mojave Air and Space Port in Southern California to Virgin Galactic’s new operations center at the New Mexico spaceport near Upham, about 50 miles north of Las Cruces. The mother ship will carry the company’s passenger rocket, VSS Unity, part of the way to space when commercial flights with paying customers begin.

It’s now permanently parked in the hangar at Virgin Galactic’s newly opened “Gateway to Space” – a three-story, futuristic operations center that the company unveiled for the first time on Thursday to select members of the media.

The company said in May that it would move about 100 employees from its Mojave operations to New Mexico this summer to join about 45 people already working here.

“We have about 89 folks in the state now,” Whitesides said. “We have another 50 to 60 people still to go, but we’ve made a tremendous amount of progress this summer. We have a lot of people reporting to work here every day.”

Company executives offered a guided tour of two of the center’s three floors, including the facility’s huge spacecraft hangar, a social gathering area on the ground floor and mission control on the second story.

The hangar is sandwiched between the center’s east and west wings, and is large enough to fit two mother ships, each with 140-foot wingspans, plus five passenger spaceships. The hangar includes a flight simulation area, plus engineering and avionics labs.

An enclosed bridge near the ceiling provides a walkway connecting the center’s east and west sides.

The entire operations facility was designed around the hanger, with windows on all floors looking down into it to allow everyone in the building, including customers, to feel connected and involved, said Virgin Galactic Vice President Julia Hunter.

“We want everyone to feel like an integrated team, so we put the hangar right in the middle where everything is happening,” Hunter said. “There’s windows everywhere, so everyone gets to be a part of it all.”

A short passageway with a lighted, interactive floor connects the hangar to the center’s lounge and social gathering area. The company named that area Gaia after the Greek goddess of Earth to represent a point of departure and return, as well as the point of each astronaut’s journey, said Virgin Galactic Design Director Jeremy Brown.

“The interactive floor in the passageway creates designs to feed the imagination,” Brown said. “We want to emphasize themes of infinity that almost make you feel weightless as you walk through.”

Gaia’s west side is made of floor-to-ceiling windows with unobstructed views of the horizontal runway where the mother ships will take off with spaceships attached to their undersides. Spectacular views of the San Andres Mountains loom in the distance.