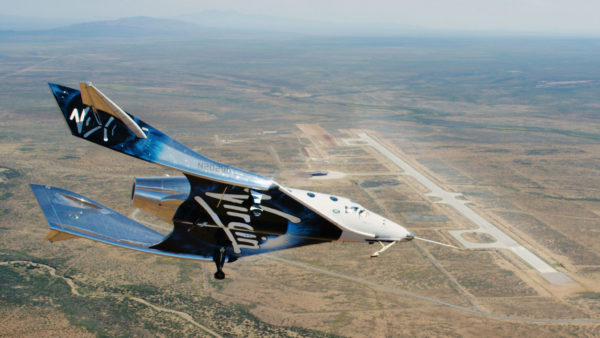 May 4, 2020 – Virgin Galactic’s SpaceShipTwo commercial space plane has officially made its first successful test flight out of Spaceport America, its base in New Mexico.

On Friday, the company announced that its suborbital spacecraft, called VSS Unity, marked “an important flight test milestone in preparation for commercial service.”

Though Unity had already completed several successful glide tests — including milestone flights in December 2018 and February 2019 — this was the first successful free flight in the New Mexico airspace.

According to the online statement, “The milestone flight took off from the Spaceport America runway, with VSS Unity attached to the carrier aircraft, VMS Eve.” The company went on to explain that all vehicles rose to an altitude of 50,000 feet before Unity was released.

“The spaceship achieved a glide speed of Mach 0.70 and completed multiple test-points, before touching back down smoothly for a runway landing at Spaceport America,” Virgin Galactic said.

“This glide flight provided the first opportunity to test all the components required to fly the carrier aircraft and spaceship in glide configuration, from a new home base and in new airspace,” the company’s statement reads. “The flight test also provided an opportunity for the pilots and spaceflight operations team to continue familiarisation with the new airspace around the Gateway to Space and a chance to capture valuable in-flight data and conduct further pilot training.”

The eventual goal is to be able to use the spacecraft to carry six passengers in commercial operations, so the fact that this test run was successful is another step closer to achieving that objective.

He remarked that the successful flight was especially noteworthy because it also took place in the middle of the coronavirus pandemic.

“We are extremely happy and proud of Virgin Galactic, not only for today’s success but also for the exceptional way they have integrated into NM and supported the region and State during this stressful time dealing with the COVID-19 pandemic,” Hicks continued. “Spaceport America and Virgin Galactic have adhered to new guidelines set by Governor Michelle Lujan Grisham to include social distancing and wearing masks. A big thank you to our foundational partner at Spaceport America!”

Per the online statement, preparation for SpaceShipTwo Unity’s next flight is now underway.

SEE THE FULL ARTICLE AT MASHABLE