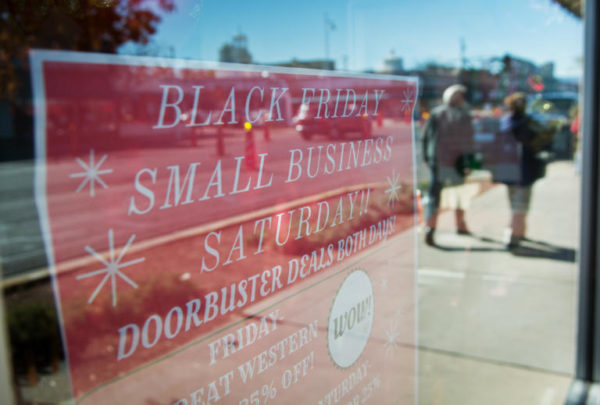 Nor is the Albuquerque woman particularly in tune with what the elementary school set considers cool.

So when it comes time to birthday and Christmas shop for her great-nieces, Kristiansen heads to Out of the Blue, an independent toy emporium on Rio Grande NW. She says the staff’s expertise and personalized service helps her identify gifts the girls always appreciate. Visiting chain stores is never as fulfilling, she said Friday amid Out of the Blue’s sea of stuffed unicorns, lava lamps, Legos and crystal growing kits.

“I go out of my way to come here,” Kristiansen said while the store’s employees wrapped her 2016 bounty.

The Friday after Thanksgiving – and now even Turkey Day itself – is considered the start of the holiday shopping season, and it’s a legendary outsized consumer bonanza.

Big lines of people eager to get big discounts on big-screen TVs.

But today belongs to the little guys like Out of the Blue – or at least that’s the goal of Small Business Saturday.

Black Friday’s younger, lesser-known cousin, Small Business Saturday is something of a shopping holiday in and of itself. American Express sparked the movement in 2010 by encouraging consumers to patronize their local stores and restaurants on the Saturday after Thanksgiving. An estimated 95 million people did just that on this day in 2015, according to a survey conducted by the credit card company and the National Federation of Independent Business.

Out of the Blue manager Lisa Gallegos said the idea has gained traction since its inception.

“I hear a lot of people telling me, ‘We’re going to come back again to shop small on Small Business Saturday,’ or they’ll tell me they saw this item on Amazon, but they knew we probably carried it (and) they waited to purchase it,” Gallegos said.

Rory Veronda, owner of Nob Hill’s Empire Board Game Library, was pleasantly surprised by Small Business Saturday last year, his first in business. Empire, where customers can pay to rent and play games on site or buy one to take home, typically draws a crowd on Saturdays and has a devoted fan base. But it saw an unexpected surge last Thanksgiving weekend.

“It was a lot of random people I had not seen in the store before,” said Veronda, who is preparing this year with special discounts on certain games. “It really did have a positive effect on us.”

Nearly a quarter of Americans – 24 percent – who said they plan to shop today said they were specifically motivated by Small Business Saturday, according to a National Retail Federation survey.

“Small business is really what the holiday season is about to me, because it’s about supporting those people who support your own community,” said the owner of Albuquerque’s Weems Galleries and Framing.

Weems, whose shops represent about 150 artists, said it’s also about atmosphere – from her 14 employees eager to assist customers and the selection of handmade items to the hot holiday cider and the lights and decor. She said she tried to get her neighboring businesses to get similarly festive with lights but was told by at least one chain store that they were limited by corporate restrictions.

“That’s another thing about small business – there’s no big business rules,” she said.

Make no mistake: Shoppers still flock to the megaretailers this time of year. Hundreds lined up before the West Side Best Buy store before staff opened the doors Thanksgiving evening, and Cottonwood Mall has had “great, consistent traffic” since Thursday night, according to marketing director Debra Sherman.

Target, meanwhile, reported strong in-store traffic around the country as well as the biggest day of sales ever for its website.

But locals eager to support local merchants have plenty of choices – New Mexico has 14,679 small retail firms, including 3,347 with just one to 19 employees, according to U.S. Small Business Administration figures.

All told, the state is home to 152,517 small businesses of all kinds that employ 331,630 people, according to SBA’s New Mexico District Director John M. Garcia.

And Albuquerque was recently recognized for the strength of its independent retail scene. Yelp, the online review giant, named the Duke City to its list of the top 20 U.S. cities for “Local Holiday Shopping.”