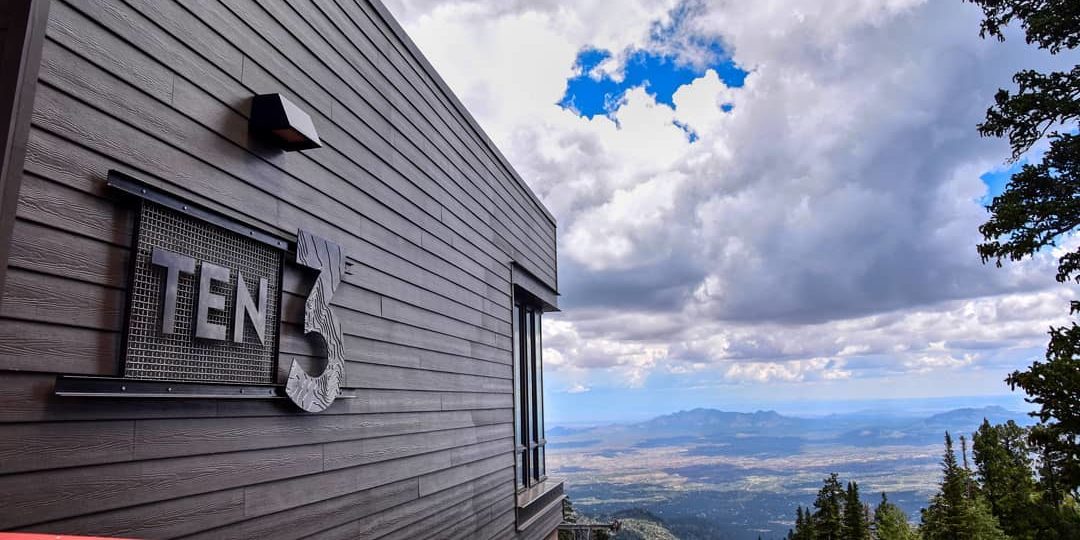 August 13, 2019 – The much-anticipated restaurant at the top of Sandia Peak, named Ten3, will be open to the public Saturday — one week after the restaurant’s “soft” opening for over 120 invited guests. Business First toured the restaurant hours before the first sit-down meal on Saturday as the final screws were tightened and garbage cans were lined.

“There’s been this kind of frantic fervor to get the construction done so then we could set a date for opening. That’s kind of the end of that chapter,” said Benny Abruzzo, president of Ten3. “We’re usually on about a 10-to-11 p.m. tram coming home. A lot of late nights … We’re actually in the fun stage now. We’re trying to get out [of] the work clothes and into the finer clothes.”

Customers were able to make reservations beginning Sunday, but the Ten3 team has long been fielding inquiries about getting a seat months in advance. Peek into the restaurant in the slideshow accompanying this story.

Abruzzo said the vision for the restaurant has been discussed for more than a decade. The space used to be High Finance Restaurant, which was torn down in November 2016 with the plan to build a new, two-story restaurant that will feature a fine dining area, a sky bar and casual restaurant, a show kitchen and an attached observation deck.

Abruzzo previously said he made a $7 million to $7.5 million investment to build the restaurant.

Albuquerque-based Bradbury Stamm Construction was the contractor for the 11,197-square-foot project. Business First rode the Sandia Peak Tramway cable car with project manager Phil Erickson and toured the progress of the construction in February.

Building on top of a mountain came with its share of obstacles as the foundation is carved into the limestone and down to the granite of Sandia Peak. Erickson’s crew dealt with the ski season and heavy snow preventing it from driving up the mountain, so it reserved a cable car at 7:30 a.m., where it would load the crew and heavy equipment. But even the tram was off-limits on multiple occasions. Over a six-week stretch in the heart of winter, Erickson’s crew couldn’t get to the site half of the time, as it was either too snowy to drive up the mountain or too windy for the tram to be used.

“Yes, the weather has tested our strength and our spirit throughout the process,” Abruzzo said. “But it’s behind us now, and that’s cool … Nobody ever gave up and nobody ever got frustrated too much … We were able to pull it off and it’s done now.”