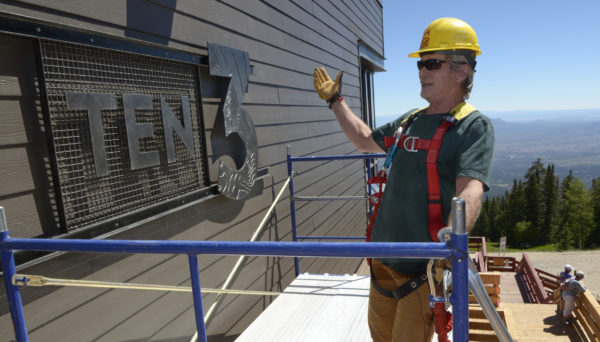 June 26, 2019 – The new restaurant towering over Albuquerque on Sandia Peak has finally revealed its name, Ten3, a literal representation of the location at 10,300 feet above sea level.

The restaurant is just north of the tram, and taking the 20-minute ride is the simplest way to get there.

Barring catastrophic weather and other complications brought by the abnormally high elevation, the $7.5 million restaurant will open at the end of July.

His menu is inspired by local flavor – there will be a green chile cheeseburger – but with global flair. Entrees are expected to cost between $30 and $40. There will be 12 beers on tap, half of which will be local brews. The restaurant hours aren’t set in stone, but will mirror those of the tram operation.

The ride up is an experience all its own. Cicadas send you off at the bottom of the tram, hawks circle around the gondolas in the middle, and crisp blue skies greet you at the top. The design of the restaurant is meant to encapsulate that same allure, said Sandra Abruzzo, who heads the design team.

She said it was important to bring the outdoors inside, focusing on the movement of the light over the landscape. There are two large rooms, with an open floor plan. The east-facing Sky Bar welcomes guests to panoramic views of the East Mountains, and the formal dining room boasts an extensive view of the city of Albuquerque and beyond. A pine-wood deck juts off to the north and will be reserved for special events.

Capturing the views from the floor-to-ceiling windows was not easy, Abruzzo said, which is why designers landed on an architecture firm from San Francisco, Bull Stockwell Allen. The firm has experience working in high mountain locations, which bring a slew of problems to the plate, including this season’s wind.

“They’ve got all this scaffolding that runs around the front, and when the wind is really blowing, they can’t get up there,” Abruzzo said.”

Abruzzo’s husband, Benny Abruzzo, who is overseeing the project, had to pause when talking to reporters Monday and wipe tears from his eyes. His father built the tram and the original restaurant, the Summit House, which opened in 1964.

“The tram changed Albuquerque forever,” he said, “everybody talks about getting to the top of the tram. This is not going to be your typical New Mexican restaurant.”

Once the restaurant is open, staff and even groceries will ride the tram to the site. Picture kegs and grass-fed beef sharing the gondola with hikers and diners alike.

Abruzzo is already looking at the next step for the Sandias and has proposed a “Mountain Coaster” that would wind between existing ski runs and draw crowds to the ski area year-round.