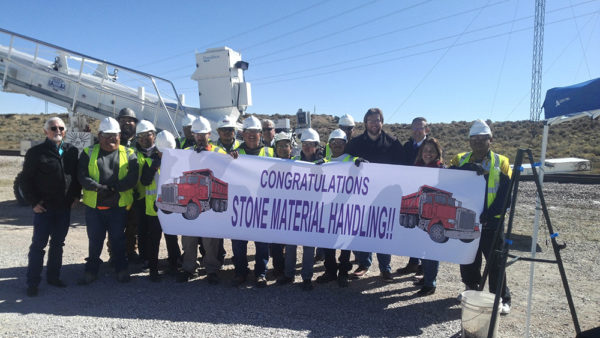 O’Malley said they hope this project shows there is work being done to support the development of Carbon Coal Road.

As part of the project, McKinley County and the New Mexico Department of Transportation will undertake a complete reconstruction of Carbon Coal Road, which was designated by the McKinley County Board of Commissioners as the primary transportation corridor for GELP in September 2014.

The road connects to U.S. Highway 491, and the reconstruction project will cost $23 million in state capital outlay appropriations. The construction is expected to begin in 2020.

Tommy Haws, GGEDC board president, said the board is proud Gallup Land Partners has found their first major new tenant.

“Hopefully it’s the start of many more,” Haws said. “We’re excited about the opportunity of bringing new jobs to the area.”

Haws also praised Gallup Land Partners for investing their own money into the site infrastructure to bring in a new vendor, and added this proactive approach is not seen very often.

“We’re in the planning stages and things are starting to happen,” O’Malley said. “We’re looking at other projects in that area, particularly a 10-kilowatt solar farm and we have three sections of land under contract.”

O’Malley emphasized the importance of building a solar farm at the site because of the economic opportunities that will follow.

“We’re not just looking for jobs in [the] traditional energy industry, but we’re also trying to bring in jobs in the renewable energy field, too,” he said.

Robert Roche, the president of Roche Enterprises, the parent company of Gallup Land Partners, said the partnership with GGEDC, McKinley County, and NMDOT have been invaluable with moving this project forward.

“Our belief in Gallup is reflected in our investments in the area, and we are thrilled to help develop and grow the northwest region of New Mexico,” Roche said.

SEE THE ORIGINAL ARTICLE AT THE GALLUP SUN