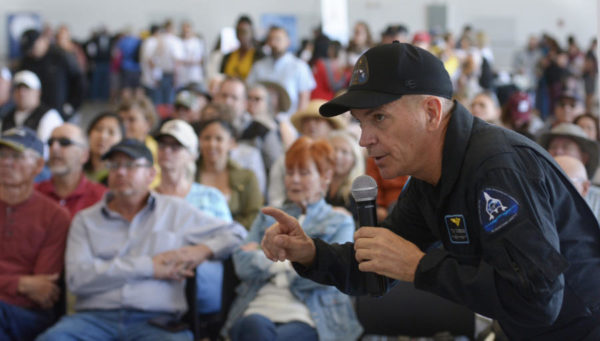 “I’m really looking forward to commercial service,” said Virgin Galactic astronaut pilot Frederick “CJ” Sturckow after giving a presentation to the crowd. “After you’ve been in space yourself, one of the funnest things is to share that experience with someone else.”

The former NASA astronaut joined Virgin Galactic in 2013 and was on SpaceShip Two’s VSS Unity alongside test pilot Mark Stucky in December. Many of those at the open house were eager to find out when Virgin Galactic would begin passenger flights to space.

“It’s super exciting for me too,” Sturckow said. “Things are coming along really well with the program. We had two successful test flights in Mojave.”

Virgin Galactic has experienced several delays including a test flight crash in 2014 that killed one pilot and injured another in the Mojave desert. But the company is back on track and expects to offer suborbital passenger flights from New Mexico by the end of this year with tickets starting at $250,000. Virgin Galactic’s owner Sir Richard Branson plans to be on the first flight from Spaceport America.

“It’s pretty cool,” said Nathan Garcia, a 17-year old high student from Las Cruces High School. “I would like to go up there into space, see how the experience is.”

He attended the festival with his mother, younger sister and brother.

“I get to learn how space works and rockets fly,” 9-year-old Anthony Garcia said.

Lucia Tellez, 10, and her father, Dominic Tellez, of Las Cruces, watch the launch of a model rocket. Lucia later launched a rocket she assembled at Sunday’s event. (Greg Sorber/Albuquerque Journal)

The festival, which drew about 2,000 persons, offered many New Mexicans their first chance to see the state’s Spaceport in person.

New Mexico taxpayers have invested more than $220 million in the facility.

“The next economy is going to be space,”Lopez said. “We in New Mexico have lost out on opportunities in the semi-conductor world, the software world. Let’s not lose the next industry and this is it.”

Several companies, including EXOS Aerospace, Up Aerospace and ARCA Space Corp, have used the Spaceport for suborbital and orbital launches carrying a variety of research payloads. But Virgin Galactic remains the anchor and most high profile tenant.

Children off all ages crowded around to watch demonstrations by the Rio Rancho Robo Racers.

She and fellow Rio Rancho student Bethany Gruenig hoped to encourage other girls visiting the spaceport to pursue careers in science, technology, engineering and math.

“Our goal for today is to spread the love for STEM” she said.