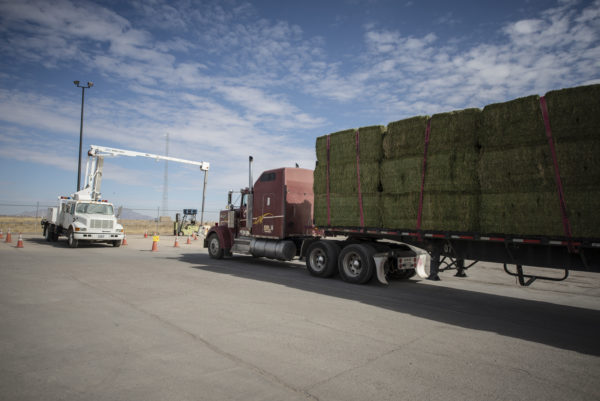 The new facility expands the number of pedestrian lanes from one to three, adds a third vehicle lane for personal cars and trucks and a new lane dedicated to commercial traffic. It also has more security features, including a hazardous material containment area, a kennel for drug-sniffing dogs and non-intrusive technology for inspecting vehicles and trucks.

The much anticipated ribbon cutting Thursday morning came after two years of construction that began in April 2017. The new port of entry replaces the old facility that opened in 1989. Since that time, the number of border crossers in Columbus has steadily increased and local residents welcome the expansion of New Mexico’s only 24-hour port of entry.

“Probably 80% of our workforce crosses the border every day. For us, expedited border crossing is important,” said James Johnson, a Columbus farmer and partner in Carzalia Valley Produce.

About 100 of his workers live in Palomas and cross the border daily into Columbus to do a range of jobs, from weeding fields to driving forklifts, Johnson said.

It’s a lifestyle shared by residents on both sides of the border who cross back and forth daily to work, go to school, shop and visit relatives. The amount of commercial traffic is also increasing at the Columbus port of entry.

In the past three months, traffic at the port of entry has topped 30,000 vehicles a month, which is up from the about 20,000 a month earlier this year, according to figures from U.S. Customs and Border Protection. In the last decade commercial truck traffic has jumped from 5666 trucks in fiscal year 2008 to 16,401 in 2018 according to CBP. During that same period pedestrian traffic swelled from 216,854 to 276,849.

Pedestrian traffic increases during the school year when at least 300 students a day walk across the border to attend classes in Columbus. Truck traffic also spikes this time of year because of the chile and onion harvests. The number of trucks using the port of entry in Columbus grows from 500 to “several thousand” a month, according to a CBP spokesman.