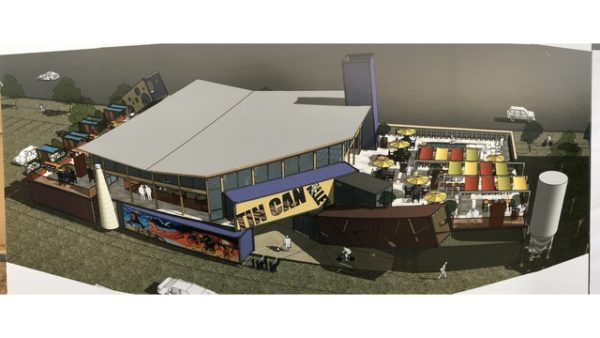 October 22nd, 2018 – Albuquerque’s popular “Green Jeans” shipping container community is getting a sort-of spinoff in a different part of town.

Developers have unveiled plans to build a new shipping container-based local business hub in northeast Albuquerque at the corner of San Pedro and Alameda.

Solomon is the developer who made Green Jeans happen. The shipping container business hub at Carlisle and I-40 was the first of its kind in Albuquerque when it opened in September 2015.

“The concept is about being an advocate for small businesses,” said Solomon.

Through Green Jeans’ success with a core of local businesses all working beside each other in the same space, Solomon says he’s ready for round two.

The Tin Can Alley development celebrated its groundbreaking with a launch party Monday night, showing renderings of the new site which will include a combination of local businesses.

“(We) get to do it again for another group of local tenants that I couldn’t be more proud of,” said Solomon

The Guava Tree Café, Vinaigrette, Amore Pizza and Santa Fe Brewing have already signed up to co-locate on the site.

“The rooftop patio will be the real draw,” said Santa Fe Brewing Owner Brian Lock, speaking of the future Tin Can Alley space.

“It’s a big employment center so I feel like there’s good opportunity for that lunchtime crowd,” said Lock.

Tin Can Alley is just one of the developments slated for the property.

“I think it’s an opportunity to do a ground-up gym,” said Bryan Pletta, owner of the Stone Age Climbing Gym.

Pletta will be building his second Stone Age Climbing gym on the same property that Tin Can Alley is building out. He says the new gym will allow his business to offer more.

“Focusing a little heavier on just the fitness aspect of it, so our strength and cardio offerings are going to be expanded quite a bit, our yoga room is about 50 percent bigger, so group exercise classes, yoga classes, we’re going to be able to handle a bit more people in those areas as well,” said Pletta.

The new site is a lot bigger than Green Jeans, which of course means more parking. Developers estimate they’ll have more than 250 spaces on the entire property.

“I think it’s going to be a great hit for us,” said Pletta.

Pletta and Solomon are estimating that construction will begin on the site in November. Their current goal is to finish the development by the end of Summer 2019.