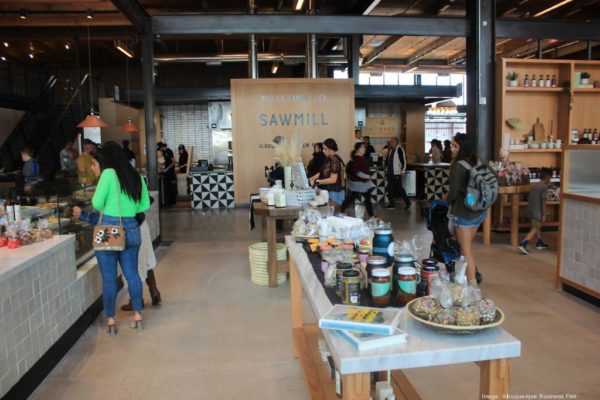 The project cost $20 million. Instead of receiving rent, Sawmill Market will charge tenants 8 percent of their sales, according to previous Business First reporting.

The Sawmill Market concept was developed by Jim Long, CEO and founder of Heritage Hotels & Resorts. Local restaurateur Lauren Greene, who owns Grove Cafe & Market with her husband Jason, worked with Heritage on the food hall concept. Albuquerque-based Hart Design and Construction was the general contractor.

Palmer described the experience of opening a market while building out the final touches as “chaotic but thrilling” to Business First Reporter Ron Davis this week.

Albuquerque loves restaurants — restaurant stories are always among our most-read news at Business First. Food halls have gained popularity across the country, but they’re very new to the Duke City. Sawmill Market will be one of a wave of food hall concepts, which also include 505 Central and Highlands Central, debuting in the city. Sawmill is backed by one of the Duke City’s best-known developers in Jim Long. We’ll be curious to see what kind of appetite Albuquerque shows for the new offerings.