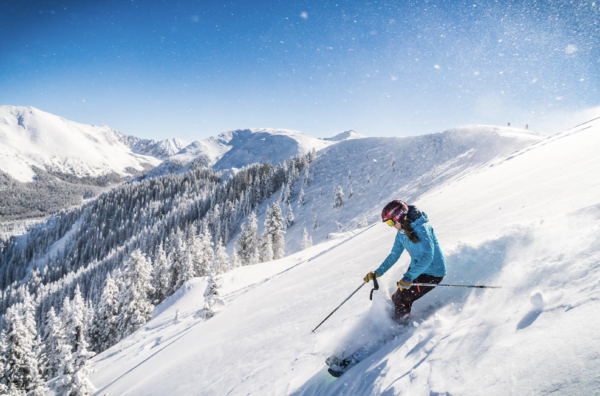 February 11th, 2019 – An abundance of snow this winter is drawing skiers and snowboarders to the peaks above Santa Fe, and those tourist dollars are trickling into town.

“This year so far is the second biggest year we’ve had,” said Kale Snider, a manager at Cottam’s Ski Shop near Hyde Memorial State Park.

And Ski-Tech Santa Fe manager Jonah Boudreau says the area has seen its best snow since 1998 and the most tourists he’s ever seen.

Ski Santa Fe in the Sangre de Cristo Mountains has had higher base and snowfall numbers — 57 inches (145 centimeters) and 140 inches (356 centimeters), respectively — in early February than some Colorado resorts, Snider said.

As a result, skiers are coming from all over, and businesses around town are feeling the effects.

Lawrence Gonzales, general manager at Tomasita’s Santa Fe, said he knows skiers are having an impact on business because they’re walking into the popular downtown restaurant with their ski gear and lift passes on their jackets.

“The skiers I’m talking to are coming from California, Texas primarily, Oklahoma,” Gonzales said. “A lot of skiers we are seeing are younger, younger groups of 20-somethings.”

The snow effect can be seen at hotels as well.

The Santa Fe Sage Inn & Suites has had occupancy rates above 50 percent through January, compared with the typical 30 percent for the month, said Starla Gomez, sales and marketing director.

“This season is better than the last three,” Gomez said. For hotels, “January and February are very hard months in Santa Fe in general.”

Drury Plaza Hotel had sold 170 ski packages through Jan. 30, triple the number from last year and on pace to be the record since the hotel opened four years ago, general manager Keith Kirk said.