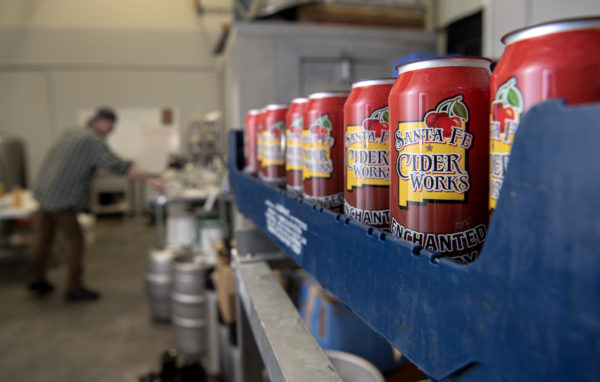 March 10, 2020 – Those looking to raise a glass on Santa Fe’s southside have a new option to consider.

Santa Fe Cider Works, which was acquired by Brian Percy and Barry Fancher in mid-November, opened a new taproom Thursday at 21 Bisbee Court.

Percy and Fancher met at California’s Beale Air Force Base in 1987. They bought the cidery when they retired, with the aim of taking it to the next level by expanding it from a purely wholesale operation.

With the exception of Santa Fe Brewing Co., which recently opened a beer hall, and an outpost of the popular New Mexican restaurant El Parasol, there are few dining or drinking establishments in the part of town near Rancho Viejo.

Percy and Fancher bought the business, which distributes hard cider to taprooms and stores across northern and central New Mexico, from brewer Jordy Dralle and business manager Michelle Vignery. Those two founded the operation in 2013.

What makes its products stand out, Percy said, is fresh ingredients.

“We use 100% fresh juice, not concentrates, unlike numerous other places in New Mexico. We also don’t add any extra sugar,” he said.

Santa Fe Cider Works has a collaboration orchard it helps maintain in Corrales and is scouting opportunities for pears.

But Percy says the Corrales farm is just a “drop in the bucket” when it comes to providing the apples required for its operation.

“Here’s the issue: There are a buttload of apples in New Mexico, but the cost of upkeep outweighs the potential profits for most growers,” he said.

Most of Santa Fe Cider’s juice comes from southern Colorado, he said, but the company would like to change that and do more sourcing in New Mexico.

Percy, who is from South Dakota, said he and his business partner, who hails from Wisconsin, want to hear from customers about possible food options in the taproom, such as tapas or cheese-based items, before they put together a menu.

The Bisbee Place taproom has 25 seats and more stools in its game room, which features a pool table and foosball.