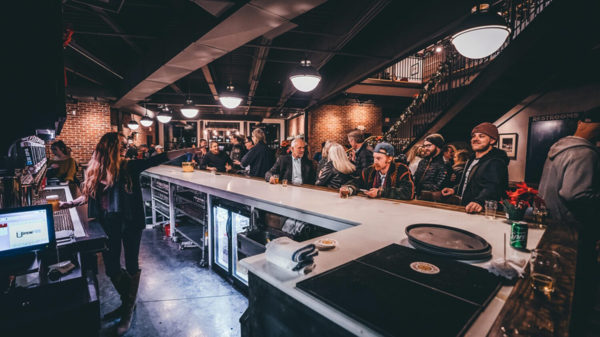 January 15, 2020 – Opened somewhat quietly in late December, Santa Fe Brewing Co.’s new destination drinking spot, called the Beer Hall at HQ, could also be called “the Brewpub Different.” A brewery “destination” was the goal of New Mexico’s oldest and largest craft brewery, the –culmination of a five-year expansion plan envisioned by owner Brian Lock. Lock aimed to create an experience that stands apart from brew pubs in other cities, and with the views of the Ortiz Mountains alone; it’s safe to say he succeeded.

Though multi-storied, the Beer Hall is barely noticeable at first, yet once you get your bearings, there it is—tucked back from the parking lot across a 60,000-square-foot expanse of carefully planned landscaping. The open-air space is centered around a large, circular, sunken fire pit which, come spring, will be surrounded by grass, shade trees and plenty of picnic tables. The invitation to BYOBlanket is open for those who want to enjoy a beer picnic-style atop the rare feel (in Santa Fe) of green grass, and there will reportedly be some outdoor games and activities when weather permits.

The Beer Hall itself is a 7,000-square-foot, two-story joint, anchored by a central staircase. The nearly floor-to-ceiling windows look out toward Cerrillos Hills and welcome in Santa Fe’s golden light; the indoor space is cleverly adorned with equal parts city/industrial, old Bavaria, and rustic/modern, plus thoughtful touches such as an impressive 18-foot long community table and, at the top of the stairs, a built-in museum case covering the brewery’s
30-plus year history. A retail shop for SFBC merch and beers solidifies the Beer Hall as a destination, not just a gathering place.