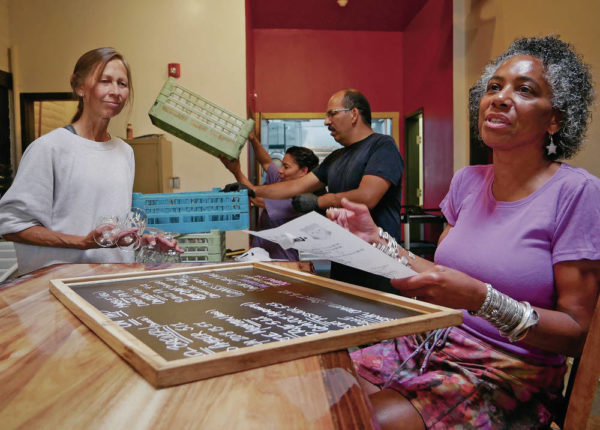 August 1, 2019 – Santa Fe Bite and its green chile cheeseburger are back.

The Bite, which recently opened in Albuquerque, is returning to Santa Fe in the former Tecolote Café space at 1616 St. Michael’s Drive in mid-September. Breakfast will be served every day except Monday, when the restaurant will be closed.

It’s been a busy time for Santa Fe Bite owners John and Bonnie Eckre since they closed Santa Fe Bite at Garrett’s Desert Inn in October. At the time, they talked about retiring. Now, Bonnie Eckre said they couldn’t come to lease terms with the hotel’s new owners.

“We wanted to take a step back and reevaluate our situation,” she said about closing the downtown location.

Pretty much right away, former Santa Fe Bite employees Jaclyn Gomez and Tomás Baca approached the Eckres with the idea of taking Santa Fe Bite to Albuquerque. At the same time, Angela Mason and Armando Rivas, who were front of house manager and chef when Santa Fe Bite closed, wanted to reopen the restaurant somewhere else in town.

The Eckres fielded and turned down numerous other franchise requests though they no longer had a restaurant.

“We have no interest to open in Denver or Texas, which we were approached with,” Bonnie Eckre said.

The popular 66-year-old eatery, once known as Bobcat Bite, was on Route 66 on the Old Las Vegas Highway from 1953 until the Eckres moved it to Garrett’s Desert Inn on Old Santa Fe Trail in August 2013 and renamed it Santa Fe Bite.

The Albuquerque trio has latched onto the Route 66 symbolism.

READ THE FULL ARTICLE AT THE NEW MEXICAN