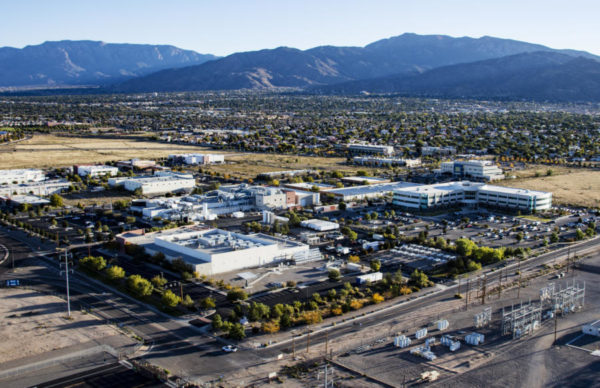 August 24th, 2018 – Sandia Science and Technology Park celebrated its 20th anniversary Friday morning with a new report showing $3.1 billion in cumulative economic activity and $5.4 billion in wages generated by the high-tech hub since 1998.

Mayor Tim Keller officially proclaimed Aug. 24 as Sandia Science and Technology Park Day at the event, held at SolaAero Technologies Corp., where that company’s founding parent firm, Emcore Corp., originally set up shop in 1998 as the research park’s first tenant. Since then, SolAero has become one of the world’s largest suppliers of solar panels for spacecraft, employing 320 people at a 100,000-square-foot facility.

Today, SolAero is one of 47 companies and organizations at the park, on Eubank Boulevard next to Sandia National Laboratories and Kirtland Air Force Base in southeast Albuquerque. Those firms together employ 2,059 people, with $748 million in wages paid out just in the past two years.

“The memory most people have of this end of Eubank in the early 1990s was of a trash dump, a place for drag racing and a premium makeout spot,” Keller told a packed audience. “It’s a role model for public-private partnerships and collaboration that’s…rebuilt an entire quadrant of our city.”

The new impact report, prepared by the Mid-Region Council of Governments, shows nearly $385 million invested in the park over 20 years, about $89 million in public funds and the rest, private investment.

The park’s $3.1 billion in total economic activity since1998 — which includes spending on goods and services, government expenditures and private investment — has generated $123.4 million in cumulative gross receipts taxes for the state, and $22.5 million for Albuquerque.

The average $98,000 annual salary for park employees is more than twice the average $46,000 salary for full-time employees in the metropolitan area, said Mid-Region Council of Governments Executive Director Dewey Cave.

“Those higher-than-average wages mean a higher level of impact,” Cave said. “Every one job in the park helps supports1.7 jobs in the region. …The economic returns here have rippled throughout central New Mexico.”

Park development hit a bump in the years following the recession in 2008, but activity has since picked up again, said Sherman McCorkle, who chairs the Sandia Science and Technology Park Development Corp.

“We hit a flat spot in the recession,” McCorkle said. “We constantly had at least one crane out here for seven of eight years in a row before that, but it’s coming back now. We expect to see two new buildings added in the park next year.”