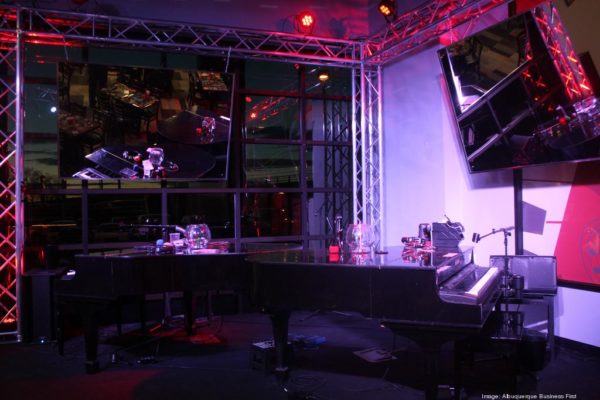 March 3, 2020 – Daniel Chavez drew the first conceptual design for Revel on a napkin. On Saturday, the Albuquerque entrepreneur and others got to see some of those initial ideas come to life in the form of a brand-new entertainment venue.

“If I were to pull the napkin up, [this] would look pretty similar,” Chavez said during a sneak preview of the space. “The very first time I walked in here, my mind just started turning. … To see the vision all come to life and see it working is amazing to me.”

The public will get to see Revel — located in the I-25 entertainment corridor at 4720 Alexander Blvd. NE — in person beginning at 11 a.m. Monday. A grand opening for the first phase is set for Friday.

The venue offers three different bars with a total of more than 30 televisions: a sports bar, a lobby bar and Chavez’s Uptown Funk Dueling Piano Bar. Several Albuquerque-based food vendors like Rude Boy Cookies, Perico’s and others, are tenants at Revel, which is set up like a food court.

Chavez expects Revel’s second phase — a 22,500-square-foot concert venue — to launch in June. He previously told Business First that the venue’s centralized location near interstates 25 and 40 and eventual capacity of 3,200, could attract concert tours to perform in Albuquerque. To accommodate the venue, crews raised the facility’s roof by 20 feet. The project had a construction budget of more than $12 million.

Albuquerque-based Scott Anderson & Associates Architects and Hart Design & Construction are the project’s respective architect and general contractor. CBRE’s Kyla Stoker was the broker on the sale and Bank of the West provided the financing, Business First previously reported.

Revel brought on 110 employees over the course of two job fairs in late February, Chavez said. The venue is expected to employ up to 50 full-time and 200 part-time employees once phase two opens this summer.