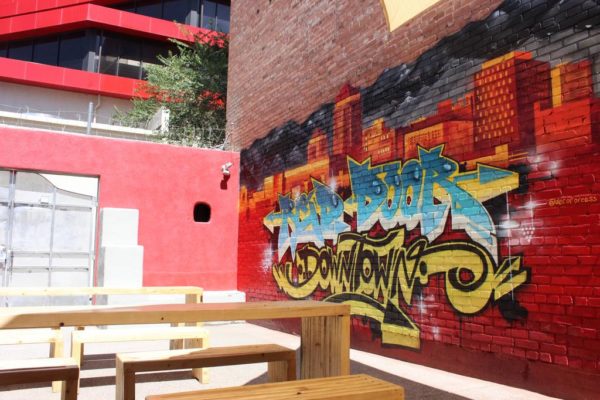 September 6, 2019 – Red Door Brewing Co. recently opened a new Downtown location on Central Avenue in a spot the brewery’s management has had its eyes on for some time.

The new digs has two patios, one in front and a larger one in the back, and is located on Central Avenue in Downtown near heavier foot traffic than its last location on Gold Avenue, according to Manager Dustin Rael.

“[There is] just a lot more opportunity… all the action is on Central,” Rael said.

The new space also has a kitchen led by Nic Riccardi, who opened Kamikaze Kitchen & Food Truck in 2017 and will now switch the focus of the business to Red Door’s kitchen. Rael said serving food is helpful in getting customers to stay longer and drink more beer. The restaurant offers Asian and Southwestern inspired dishes including green chile chicken and pizza egg rolls.

Red Door held a soft opening Aug. 14 and an event for those in the industry a week later. Its grand opening was Aug. 23. The spot employs around 15, five of which are Kamikaze employees. Riccardi said it is around 2,300 square feet inside.