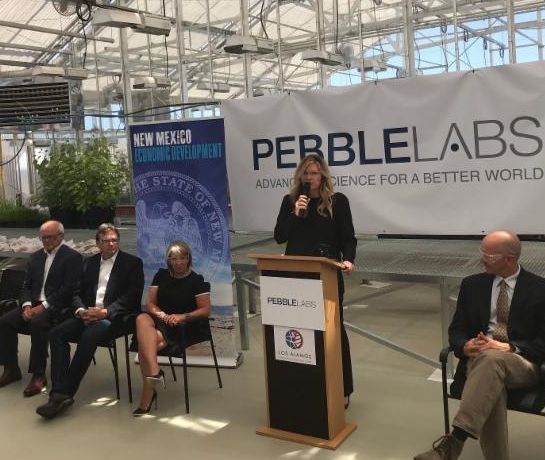 Pebble Labs plans to expand to more than 230 full-time employees. The company is managing research on food and crop safety, public health, and the reduction of the occurrence of vector-born diseases including the Zika Virus. As part of the expansion announcement Tuesday, Pebble said it has reached a breakthrough in substantially reducing disease in farm-raised fish and shrimp throughout the world without the use of antibiotics.

“I am proud to be supporting homegrown businesses like Pebble Labs that are driving innovation and cutting-edge scientific research right here in New Mexico,” Gov. Lujan Grisham said. “By investing in promising industries like biosciences and technology, we are creating sustainable, high-paying jobs and growing our local economies. This is exactly the kind of business expansion and industry growth that will diversify the state’s economy and keep talented young adults here in New Mexico.”

Cabinet Secretary Alicia J. Keyes of the Economic Development Department said the State is pledging $4 million in LEDA (Local Economic Development Act) funds to help with expansion of the Pebble campus, located in the Entrada Business Park. Pebble Labs was formed by a former Los Alamos National Laboratory scientist and plans to invest at least $60 million in the next 10 years.

“New Mexico has stepped up with a major investment package to help ensure the success of Pebble Labs,” said Keyes. “The company promises to change the world with breakthroughs in food safety and disease research. The expansion will create good high-paying jobs in New Mexico.”

Keyes said Pebble also qualifies for up to $3.25 million in employee training money from the State’s Job Training Incentive Program (JTIP), a grant that helps reimburse businesses for the cost of employee training. Pebble may also apply for future incentives such as the high-wage jobs tax credit. Both programs have application guidelines and benchmarks that would have to be satisfied.

Los Alamos County is assisting with the issuance of $12.5 million in Industrial Revenue Bonds and will retain ownership of a portion of the property with Pebble, leasing the space back from the county until the bonds are paid.

Full-time workers at Pebble Labs, many with specialty PhD’s, earn about $130,000 and the company will spend $20 million annually. The direct economic impact is expected to be $577 million with over $1 billion in total economic impact, both direct and induced.