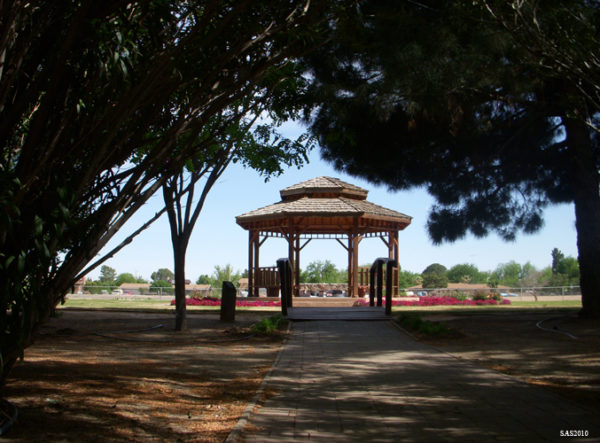 December 26, 2019 – New Mexico State University will soon have the only botanic garden in New Mexico within 100 miles thanks to a grant from the Stanley Smith Horticulture Trust to the College of Agricultural, Consumer and Environmental Sciences. The money will go toward building a public garden that also supports ornamental horticulture research.

Chris Cramer, professor of horticulture in the Department of Plant and Environmental Sciences, will be using the botanic garden to evaluate plants native to New Mexico and the Chihuahuan Desert that might attract bees and other pollinators.

“There’s a lot of interest in growing plants that attract pollinators because there’s been research to show that their population levels are declining,” Cramer said. “So, we’re hoping on a research side to evaluate different plant materials and species to see how attractive they are to pollinators, but in a more visually pleasing way like a botanic garden.”

Rachel Gioannini, assistant professor of horticulture in the Department of Plant and Environmental Sciences, is leading the design of the botanic garden. She took Cramer’s scientific parameters and designed a garden that would be welcoming to visitors.

“The parameters I was given were to have four repetitions with the same plants in each plot,” Gioannini said. So, what I did was take the paisley pattern which is more visually appealing than straight rows of plants.”

The plan incorporates paths throughout the garden and a large gazebo for shade and outdoor events.

The botanic garden, which will be free to the public, will be located along East College Ave. within walking distance from the Las Cruces Convention Center, the Courtyard by Marriot hotel, and NMSU’s Heritage Farm. It will be 81,000 square feet include parking.

Gioannini and Cramer predict it will take several years for the garden to be completed.

“The first thing we need to do with our funds is to get the science part up and running and then raise some funds for the rest of the garden, which will be probably be privately funded,” Gioannini said.

The botanic garden offers many benefits for the community and NMSU including a teaching tool and health benefits.