NM United Finishes Season with Win and Looks to Playoffs 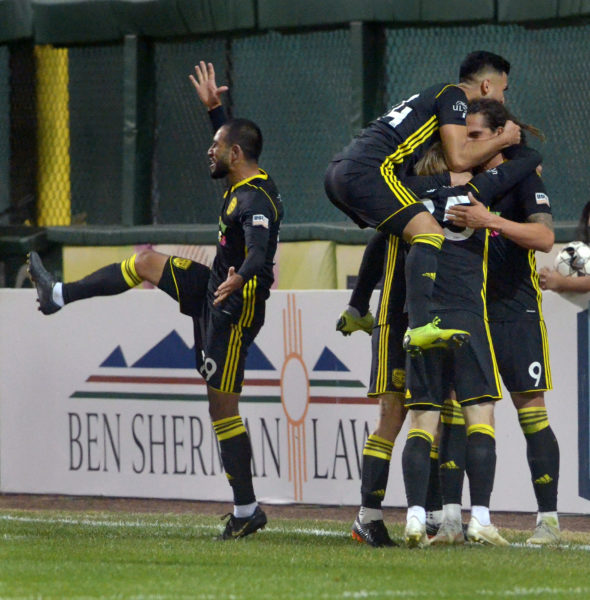 October 22, 2019 – In a season intrinsically defined by a number of firsts on and off the pitch, New Mexico United managed to lead the USL Championship in home game attendance, outperform the typical expectations for expansion clubs and set a new standard for what professional soccer could look like in the Land of Enchantment.

United won’t have to wait until 2020 to build on an already-impressive résumé.

New Mexico’s inaugural regular season came to a wired, improbable close on Saturday night at Isotopes Park with a playoff-clinching 2-0 victory over Las Vegas Lights FC in front of an announced sellout crowd of 13,788.

Chris Wehan scored the opener for the home side in the 37th minute, and Albuquerque native Devon Sandoval put an exclamation point on the win with an 87th-minute goal following an explosive counter.

United head coach and technical director Troy Lesesne said securing the last-minute postseason berth wasn’t what he would have drawn up.

“I wish it wasn’t as dramatic as this, but maybe that makes it that much sweeter,” Lesesne said at midfield after the match. “These guys have put in so much this entire season, and for them to reach their goal of making the playoffs in year one is a phenomenal accomplishment.”

United has little time to rest to savor its achievement: The first round of the playoffs will see New Mexico travel to Sacramento to play Republic FC on Wednesday at a to-be-determined time.

“We have to turn our focus very quickly (to Sacramento),” Lesesne said. “Our work’s not done yet, but we’ve done so many positive things in year one, and (making the playoffs) is the ultimate positive.”

Going into the season finale, New Mexico needed a win and either LA Galaxy II or San Antonio FC to drop points to sneak into the final playoff slot in the Western Conference. It would end the evening with both after a shock 2-2 draw between San Antonio and 10-man Colorado Springs Switchbacks FC bumped United up a place.

The opening salvo was a lengthy one in which New Mexico dictated the majority of play, and in the 37th minute United’s high press paid dividends at last.

Las Cruces native Josh Suggs seized an unmarked moment to pitch a cross into the six-yard box that substitute keeper Thomas Olsen badly misjudged. Though Olsen caught enough of the ball to deflect it out of danger momentarily, so too did he catch teammate Gabe Robinson, sending both sprawling to the turf and clearing the mouth of goal for Wehan. The UNM men’s soccer alum took the opportunity to swerve a vicious half-volley into the roof of the net.

Halftime gave supporters an opportune moment to check their phones for update scores from around the league, and San Antonio’s second-half collapse against Colorado Springs provided the jolt of optimism they sought. The supporters’ section behind the south goal erupted in cheers as word spread of the 2-2 draw in Texas, and attentions turned squarely back to exploits on the pitch.

Largely utilizing a defense-minded approach for the second half, United would find its breakthrough after Bruce came on as a substitute in the 85th minute for Santi Moar, and Sandoval would seal the victory minutes later.

A solitary yellow sign waving in the supporters’ section after most of the crowd’s raucous energy dissipated outside the stadium seemed to distill the ethos of the unlikely evening — and indeed, the summation of United’s season.