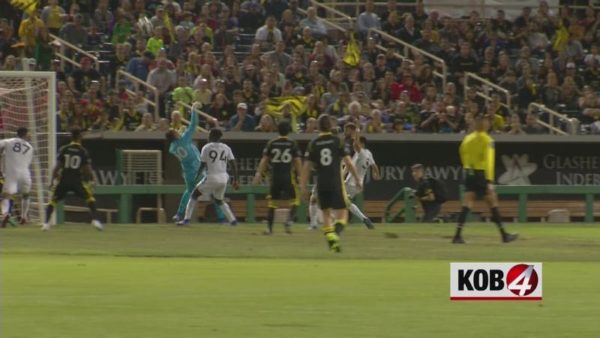 April 29, 2019 – The New Mexico United soccer team has had a lot of success on and off the field.

The team has averaged more than 11,000 fans at Isotopes Park and Albuquerque residents can be seen sporting the club’s merchandise including jerseys, shirts and stickers.

Now, the team hopes to mirror that success with a new headquarters on the corner of Carlisle and Central in Nob Hill.

“We love the idea of a young family coming down here, walking around, enjoying all the restaurants and scenery and stopping by to get some New Mexico United gear,” said Lukas Cash, the team’s digital media manager.

Crews spent the early part of this week putting the final touches on the new store which is slated to open on Thursday. The opening comes a few days before the team’s big Cinco de Mayo match up.

“So it’s all going to start with tailgating across the street and over in the UNM lots. There’s going to be live music, screen printing, face painting — it’s really going to be the essence of the holiday,” said Cash.