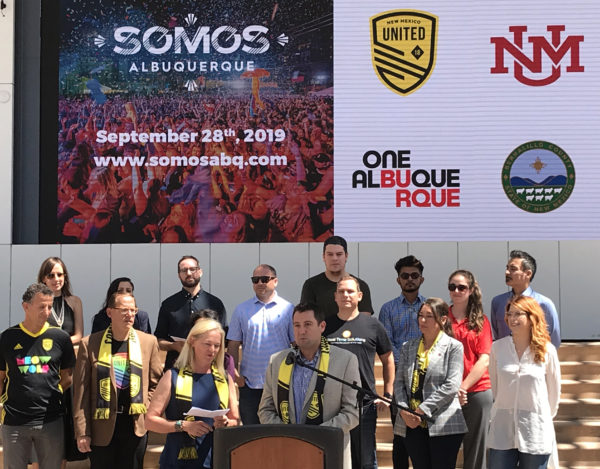 July 9, 2019 – Take a showcase for the best of Albuquerque and combine it with a soccer game, and you get one heck of a party.

Officials from the city of Albuquerque, Bernalillo County and SOMOS ABQ on Monday announced a new partnership with the New Mexico United soccer team, creating a one-day Somos Saturday festival that is expected to draw upward of 30,000 people between venues at Civic Plaza and Isotopes Park.

SOMOS ABQ, which highlights everything unique to Albuquerque and its multiple cultural influences, is now in its third year. The festival was previously held along Central Avenue in Downtown Albuquerque, but for the first time it will be held on Civic Plaza.

The SOMOS Saturday event will take place on Sept. 28, starting with children’s activities, live music, performers, dancing, designers and art installations. There will also be a host of local vendors selling crafts, food, beer and wine.

Shuttle service will be available to take fans to Isotopes Park to watch New Mexico United meet the Phoenix Rising, now No. 1 in the league, for a 7:30 p.m. game. That game will be live-streamed on the internet so people at Civic Plaza can watch the competition on monitors, while fans at the soccer game during halftime will be able to see live music and other events streaming from Civic Plaza.

Shuttle services will return fans to Civic Plaza after the game for more celebration and an after-party at the Albuquerque Convention Center, just east of the Plaza.

Ticket packages will go on sale Friday at www.somosabq.com, where the still growing roster of events and performers will also be posted and updated.

“Part of what SOMOS is all about is invigorating Downtown, so for us, moving this to Civic Plaza is part of invigorating the places in Downtown that make it special,” said Albuquerque Mayor Tim Keller.”

Julia Mandeville, one of the founders of SOMOS, said the organization “began and remains a love letter to Albuquerque.” The festival is a “cross pollination” that transforms the space into an immersive environment across multiple mediums, she said.