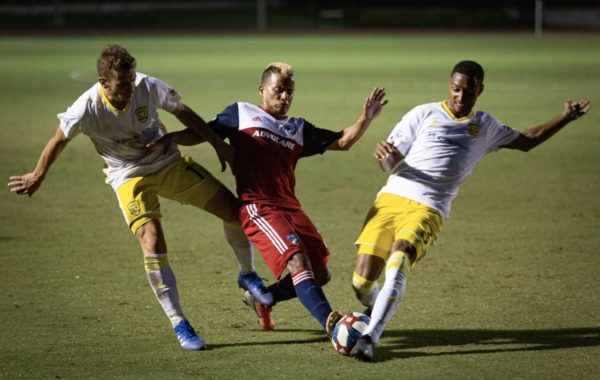 June 19, 2019 – New Mexico United pulled off another upset victory over an MLS team Wednesday night, defeating the Dallas FC 1 to 2.

The United will now move on to the quarterfinals of the US Open Cup, where they will meet Minnesota United FC.

Around 200 United fans gathered at Starr Brothers Brewery in northeast Albuquerque to watch the game.

“The boys work so hard and they bring this community together,” said Chelsea, one of the hundreds of fans watching the game at Starr Bros. Wednesday.

Many fans say the team’s success is inspiration for the community.

“They’re making the community better, that is more intimate and it’s been more of a real connection than any of the teams I’ve loved in a place I don’t live, for decades,” said Jake Gutierrez, another NM United fan.

Going into Wednesday’s U.S. Open Cup match, the United were coming off of a loss Saturday.

The win against FC Dallas represents the team’s second win against an MLS team. A week ago, the United beat the Colorado Rapids on penalty kicks for a final score of 2 to 4.

A USL soccer club, the United will face another MLS team next in the U.S. Open Cup. Their game against the Minnesota United FC is slated for July 10.