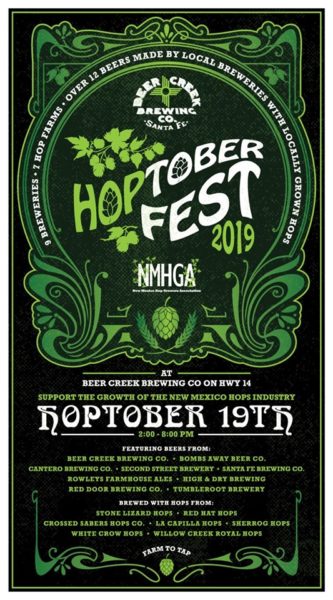 October 18, 2019 – Hoptoberfest is more than a beer event it is also a celebration of New Mexico hops growers.

This is the first time members of the New Mexico Hops Growers Association have come together for a public event. Hoptoberfest, which takes place Saturday, Oct. 19, at Beer Creek Brewing Co., south of Santa Fe, will showcase Crossed Sabers Hops Co., La Capilla Hops, Red Hat Hops, Sherrog Hops, Stone Lizard Hops, White Crow Hops and Willow Creek Royal Hops will participate in the festival. The local craft beers that will be part of the event were made with hops grown in New Mexico.

“Hops are an essential ingredient in beer,” said Rich Headley, Beer Creek and Crossed Sabers Hops Co. partner. “It all started as a hobby with making homebrews, which we did for a decade, and … now we’re a commercial brewery. It’s funny. Hops are essential ingredients in almost all beer. Hop plants are beautiful, so we were growing them ornamentally for ourselves and decided, ‘Hey, let’s do a test (run) on the ranch.’ ”

Beer Creek recently brewed its first beers in-house. It previously relied on other local breweries to brew its beers while it waited on its brewery to be completed. It also brewed collaboration beers with some of those breweries, including an imperial blonde called Lizard Queen with Tumbleroot, and Red Creek Double IPA with Red Door. Earlier this month, head brewer Jami Nordby first brewed, at Beer Creek, a Cascade smash beer made with one variety of hops, one grain and a standard California Chico strain yeast. A robust India Pale Ale was then brewed a few days later, according to Headley. Beer Creek’s most popular beer has been its Coming Soon Pale Ale, which is reminiscent of the early days of pale ales, because it’s a little less hoppy a little more malty than more recent pale ales.

Beer Creek tries to incorporate locally grown hops in its beers, including from its 4-acre farm, Crossed Sabers Hops Co., which predominantly grows Chinook and Columbus hops. New Mexico has about 14 to 16 acres among all the hops farmers in the state. It would take about 500 acres to supply a small brewery, so some hops have to be obtained outside New Mexico, according to Headley.

“There’s a whole movement,” Headley said. “You’ve heard the movement ‘Farm to Table.’ We’ve kind of phrased ‘Farm to Tap.’ And it’s just a natural movement for most people who are curious or concerned about what they’re putting into their bodies. We actually harvest the hops sometimes here on the patio. We’ll bring the hops from the field to the patio. We have a combine basically like a harvester machine that we will set up and run hops through. Gives guests sitting out in the patio a chance to see how that happens.”

SEE THE FULL ARTICLE AND EVENT DETAILS AT ALBUQUERQUE JOURNAL