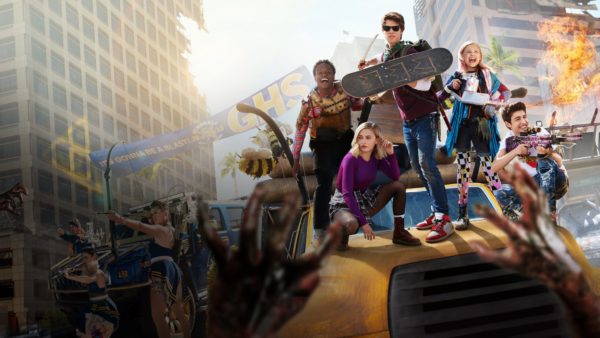 November 1, 2019 – A new post-apocalyptic show on Netflix is gaining traction. And, it was filmed right here in Albuquerque, highlighting a local school.

If you’ve watched the show and noticed some familiar places, that’s because Highland High School serves as a backdrop. The new show is called “Daybreak.” The post-apocalyptic comedy-drama premiered last week.

It features a handful of local actors, and although it takes place in Glendale, California, locals can’t help but notice it’s actually Albuquerque.

Students who attend Highland think it’s pretty cool their school is in the spotlight.

“I was watching them film it last year and I thought it was really cool to see the behind-the-scenes type thing,” said Ryan Garrett, a student at Highland High.

He said filming was actually going on while school was in session, even in the halls while class was going on.

“It seems pretty cool. I really like how they did the school and everything, so I’m really proud of that,” said Antonio Maldonado, another student at Highland.

The high school isn’t the only Albuquerque location featured. Shooting was also done at the Cottonwood Mall, the Rail Yards, and the old Trinity Methodist Church in Nob Hill, showing off all the city has to offer.

“If something’s shooting in Albuquerque the economic effect can actually be felt statewide,” said Amber Dodson, the city’s film liaison in a recent interview.

She says the more TV shows and movies that film here increases New Mexico’s worth statewide in the film industry.

“Albuquerque has so many assets, so many benefits to shooting film and TV here, but there’s no reason why we can’t be number one in the world…for being the premier production hub,” said Dodson.

Last year, Netflix bought Albuquerque Studios, agreeing to spend $1 billion on productions over the next decade.

SEE THE FULL ARTICLE AT KQRE