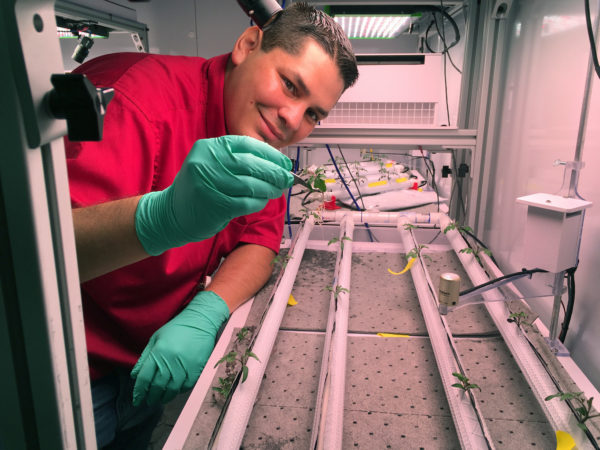 With input from an Española native and NASA researcher, a hybrid version of an Española chile plant has been selected to be grown in space. The New Mexico chile is tentatively scheduled to be launched to the International Space Station for testing in March 2020.

Jacob Torres, a 1997 McCurdy High School graduate, is part of a NASA group testing how to produce food beyond the Earth’s atmosphere.

Growing plants in space has been one of NASA’s priorities for decades, said Torres, a technical and horticultural scientist in the Kennedy Space Center’s Plant Life and Utilization Sciences division in Florida.

Now, with NASA’s goals of new moon landings and sending humans to Mars, Torres said the work is especially pertinent. Some of the packaged food made for astronauts is known to diminish in nutritional value over time.

“Which means that if we do go on a deep space mission, or we do go to the moon or a mission to Mars, we will have to figure out a way to supplement our diets,” he said. “Understanding how to grow plants to supplement the astronaut’s diet would be essential to our mission to going to Mars. So that kind of fuels our research that we’re doing now.”

The pepper going to space has an Española name, but is bipartisan when it comes to the long-running debate over whether northern New Mexico chile is better than Hatch-grown, from the southern part of the state.

The “Española Improved” chile plant, a cross between a northern New Mexico seed and the popular Sandia seed from the Hatch Valley, will be the first fruiting plant that the U.S. will grow aboard the Space Station. NASA’s astronauts have previously grown greens, and a zinnia bloomed in space in 2016.

Torres said the point of sending the chiles into space is to demonstrate how NASA’s Advanced Plant Habitat – which recreates environmental needs for plant growth like Co2, humidity and lighting – works not only for leafy greens, but for fruiting crops, as well.

Many plants that produce fruit typically require pollen from the male flower of one plant to be transferred to the female flower of another plant. Because bees and other pollinators don’t exist in space, Torres said the NASA team has focused their interest on self-pollinating fruiting plants, like tomatoes and pepper plants, “where the astronaut can just shake the fruit and pollinate it.”

READ THE AP VERSION AT CBS