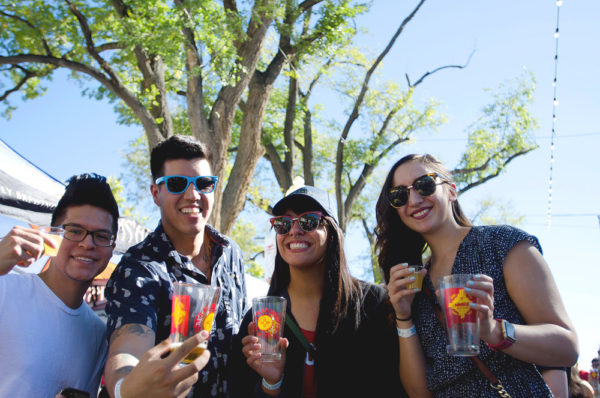 When event co-founder Kevin Hopper began the festival, he did not foresee the giant growth boom New Mexico breweries would make in the state.

“There was no point of reference, really,” Hopper said. “I think there was just a handful of (New Mexico) breweries. I expected it to grow, but not 80 breweries or something. That’s just incredible. What I love about it, and very surprisingly, most of the beer stays in the state.”

“If you were, let’s say, back in 2007 or something, if you were a brewery and you did some market research, would you know that all of these people would be into craft beer?” Hopper asked. “It would kind of be a risk, you would think. It’s just amazing that there’s so many people that got into it. That’s what makes the whole state thrive, is the people. I mean, the breweries making great beers is necessary, but the people drinking it and being excited about it, telling their friends, that is what makes the whole state thrive, that whole industry.”

“We can’t feature everyone, obviously,” Hopper said. “But I do like a good mix of new and old, innovative, and distilleries are totally welcome. We do like that we have a cider company there, as well.”

Ticketholders will receive a pint glass upon entry for sampling and to purchase full pours of their choice. Early-entry ticketholders get first dibs and will have a full hour to themselves to sample and purchase a pint or cocktail.

“A lot of people like to start with a Bloody Mary at Left Turn (Distilling) and then move on to beer,” Hopper said. “That early-entry ticket is nice. I’m surprised. It’s more expensive, but a lot of people really like being the first to go to all these different breweries and taste the beers that are there. You get first taste.”

Local bands Crazy Fool and Concepto Tambor will entertain. DJ Flo Fader will get the party started. Attendees can also peruse a number of arts and crafts and food vendors or adopt a dog from Pet-A-Bulls dog rescue.

For the 10th annual event, the festival is returning to where it all started, in Villa Hispana at Expo New Mexico.