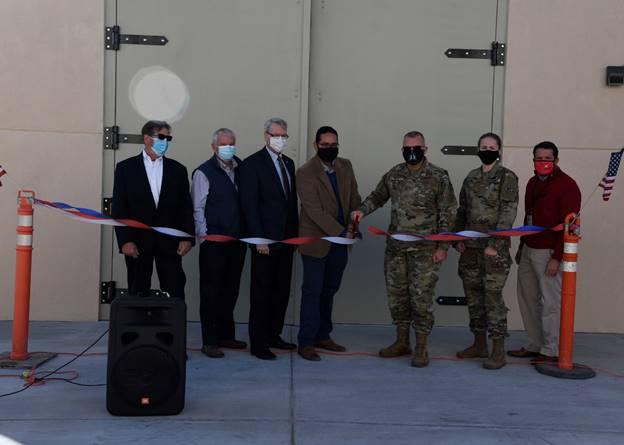 November 3rd, 2020 – The Air Force Research Laboratory Space Vehicles on Kirtland Airforce Base celebrated the completion of its newest construction project, the Deployable Structures Laboratory, or DeSel; A ribbon-cutting ceremony was held on Oct. 29.

According to an Air Force Research Laboratory news release, the construction of the $4 million, 7,000+ square foot laboratory began in Dec. 2019. Scientists and engineers working in this new laboratory will continue the work of the Spacecraft Component Technology Center of Excellence that has a long history of technology development and transition in spacecraft structure materials.

“I’m excited to have a facility that was specifically built for testing novel deployable space structures,” said Benjamin Urioste in the same news release, research engineer, and lead for the Integrated Structural Systems team that will be performing the research in the DeSel. “With the push towards hybrid architecture and smaller satellites, high packing efficiency structures and the ability to bring large satellite capability to small satellites is more important than ever.”

According to the news release, AFRL has been doing research and development of high strain composite materials, for more than a decade, for use on spacecraft.

Urioste says the facility is capable of testing 20-meter x 15-meter structures in a secure, climate-controlled, vibration isolated laboratory. He also said that specialized equipment will be used to analyze the precision and repeatability of spacecraft structure deployments.

“The structures made possible by high strain composites will enable new mission paradigms for the U.S. Space Force,” said Mark Roverse in the same news release, the Spacecraft Technologies Division Chief. “AFRL has led development of high strain composites for deployed
spacecraft structures and we are excited to see the new mission capabilities that are
being enabled.”