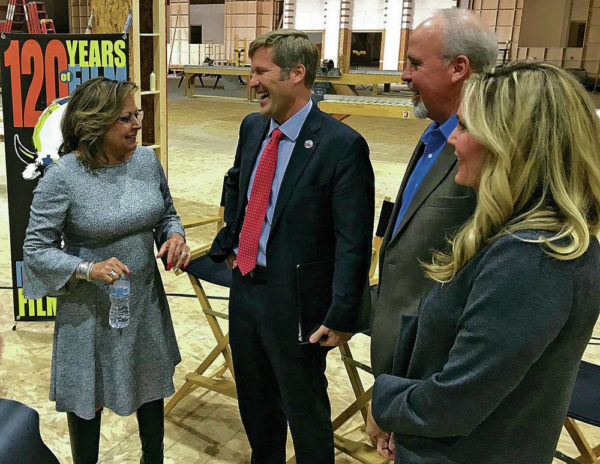 October 9th – Netflix might be making its big splash in Albuquerque, but the waves are likely to reach all parts of New Mexico.

That’s the forecast from members and observers of state film business a day after Netflix, one of the world’s most valuable media companies, announced plans to purchase Albuquerque Studios and establish a production hub in the city.

Some Netflix folks already came through this week, scouting for space for a project next year, said Octavio Marin.

“They will be all over the place,” said Marin, director of operations at Santa Fe Studios. “They’re not just going to use the stages down there.”

Eric Witt, who leads the Santa Fe Film Office, said he had two phone calls from producers within an hour of the announcement Monday.

Called a “transformative victory” by Albuquerque Mayor Tim Keller, the joint state-city deal, the first of its kind for Netflix in the U.S., is projected to deliver $1 billion in production spending in New Mexico over the next decade and thousands of jobs.

As important, meanwhile, is what Netflix choosing Albuquerque means for the state industry as a whole, according to members of that industry who described it as a first step toward a booming new era for the state’s film and television business.

“It’s almost like getting the Good Housekeeping seal of approval — the film equivalent of that for the state’s program,” Witt added. “It validates the long-term investment the state has made.”

Netflix is no stranger to the state. The Netflix-produced Godless was shot at Santa Fe Studios and in surrounding country settings in 2016; that miniseries drew rave reviews from critics and earned a pair of Emmy Awards this fall for its star-studded cast.

The neo-Western Longmire, revived by Netflix after its cancellation on A&E, was based in Santa Fe through last year — as was The Ballad of Buster Scruggs, the forthcoming Western from the critically acclaimed Coen Brothers, Joel and Ethan.

But for Netflix to set down an anchor with a permanent production space underscores New Mexico’s broader moviemaking credibility — and the quality of its base of crew workers — to other top-shelf content producers in Los Angeles, Marin said.

“If you’re cool, everybody wants to be part of it,” Marin said. “I believe other people will jump on the bandwagon and come. At the end of the day, Netflix, they have hundreds of shows in the pipeline for production; they have billions of dollars to invest. But that’s only Netflix. You have Amazon Studios, you have Apple, you have Hulu, you have YouTube.

“It’s going to be positive,” he added. “But now it’s going to be the homework of the state to support these productions, to roll out the red carpet.”

Netflix establishing a regular cycle of its episodic productions in Albuquerque could create a sort of chain reaction, others said, bringing more stable job opportunities for crew workers statewide, which in turn increases the call for more new workers and the state’s capacity for more productions.

“Series keep people employed for a longer period of time,” said Anton Walpole, a Santa Fe filmmaker who served as unit production manager on Godless. “The new model has taken a lot of the crew base and puts them in a very secure position.”

“People who live and work in Santa Fe will get hired down there,” said Deborah Potter, chair of the Santa Fe Film and Digital Media Commission. “And [Netflix] will come up here and they will do shots up here. They’ll use our surroundings. I think having a studio an hour away is pretty common in L.A.”

Witt noted the vendors and suppliers that accommodate film and television production — costumers, caterers, set production outfits — can safely invest and expand with the Netflix investment as a backdrop.

“There’s stability in the market going forward,” he said. “And it is going to drive other production to other soundstage spaces. To the degree Netflix is occupying Albuquerque Studios, people are going to have to look elsewhere. That drives up demand for other studio space in the state proportionally.”

That could mean more business at the Garson Studios on the city of Santa Fe’s midtown campus, studios in Las Cruces and Albuquerque — or studios yet to be built. Industry insiders have long said the state’s film epicenters could use more space.

But there are challenges embedded within the opportunity. Steinborn, who is president of the nonprofit Film Las Cruces, said the need to reckon with the state’s so-called incentive cap — a $50 million annual maximum on the rebates the state can pay out to qualifying film producers — would now become a priority in the next legislative session.

With Netflix pledging to spend $100 million a year in production, and the state paying back at least 25 percent of production expenditures through its rebate program, Netflix will gobble up roughly half the $50 million maximum each year.

“It’s a good problem to have because we’re getting more business, but … this puts the cap issue front and center for us,” Steinborn said. “It’s a good time to consider raising it.”

Removing the cap would be the most straightforward signal, Witt and others said, to more where Netflix came from.

“I personally consider this a first shot; I don’t think this is going to be the end of expansion of the industry in the state by any stretch,” Witt said. “I’m very confident that if we play our cards right, if we straighten out the program here, we can easily double what we have in 12 months, triple it in next 12 to 24.

“[Netflix] is indicative of that kind of scale, the kind of production we can attract.”