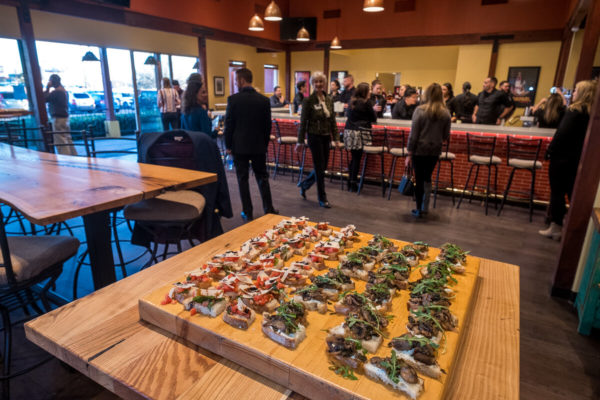 For the past five months, Haas and the rest of the M’tucci’s Restaurants partners were in the process of converting a vacant 10,000-square-foot space into their newest venture: M’tucci’s Twenty-Five. The restaurant, on the site of the former Chama River Brewing Co., will officially open Monday after it gave the first look to several hundred guests on Thursday.

“The last few weeks have been just a total drain because we’ve really been pushing to get to the end,” Haas said. “Now that we’re almost there, the excitement is starting to come out … We think we can do something really special here.”

View the accompanying slideshow to see the gathering at M’tucci’s new restaurant on Thursday night.

The restaurant will be able to accommodate nearly 300 guests and will offer patio seating that offers space for another 75 to 100 guests. It also will have a banquet space that can be used for private events or regular dining.

Haas said the restaurant added about 120 employees over the hiring process, effectively doubling the size of M’tucci’s team.

Business First reported on M’tucci’s applying for a liquor license at 4939 Pan American Freeway NE — the address of its soon-to-be-open restaurant — in early September.

“There’s not a lot of privately-owned restaurants in this area,” Haas said. “I think people are excited to have a local restaurant here, along with Tomasita’s … For us, it’s really our first chance in getting exposure to the whole city.”

Keith Meyer and Jim Wible of NAI Maestas & Ward represented the landlord in the deal and Albuquerque-based AIC General Contractors was the contractor on the project.

M’tucci’s has locations at 6001 Winter Haven Road NW and 1908 Wellspring Ave. SE in Rio Rancho. Business First reported in July on M’tucci’s partnering with Albuquerque-based Lava Rock Brewing Co. to create an “Italian ale house menu” for Lava Rock. Business First reported in November that M’tucci’s Italian Café & Market was in the process to be converted into a wholesale operation.

Haas previously told Business First it cost around $700,000 for the build-out of the new restaurant, but said it went a “little bit” over that mark during the construction.

“We went into this saying we’re going to cut no corners, and we’d do whatever we had to do to make this perfect,” Haas said. “Ultimately, that’s what we did.”