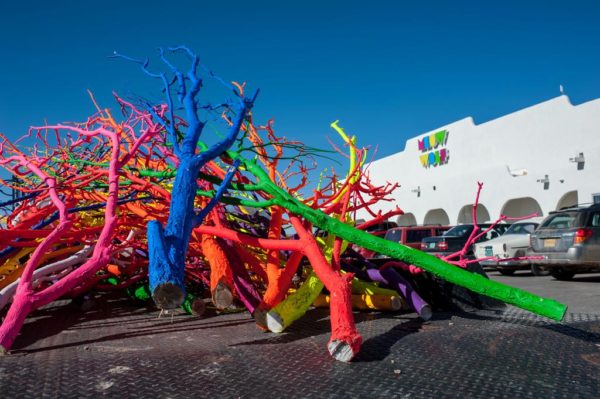 The fast-growing interactive arts company plans a four-story office addition of around 68,000 square feet to its Santa Fe manufacturing facility, 2600 Camino Entrada, that would house 200 employees. Some of those employees would be existing workers coming from various offices around town and others would be new hires, according to Elisa Montoya, Meow Wolf vice president of operations, and Jennifer Jenkins of Albuquerque’s JenkinsGavin, a Santa Fe land use and project management firm overseeing the expansion.

The plans were unveiled at an Early Neighborhood Notification meeting, held so those living in nearby residential areas can discuss proposed projects over 30,000 square feet in size.

Montoya said she was unsure of exactly how many new employees would be hired. She added workers from about eight separate local offices, which hold over 100 staff altogether, would relocate to the new digs. Meow Wolf also is scouting city-owned property near the site for additional parking, Business First reported.

“This will accommodate the needs of Meow Wolf employees as they expand on multiple endeavors,” Jenkins said, adding that the new space will call home to high-level creative professionals and administrative staff.

The company’s next step is to submit an application with the city of Santa Fe, which it expects to do in mid-October. The space would take about two years to build and Meow Wolf hopes to start construction in the spring, according to Jenkins.

Santa Fe-based Autotroph was chosen as the architect. A general contractor has yet to be selected and the price tag of the addition would be in the millions, Jenkins said, declining to provide renderings to Business First.