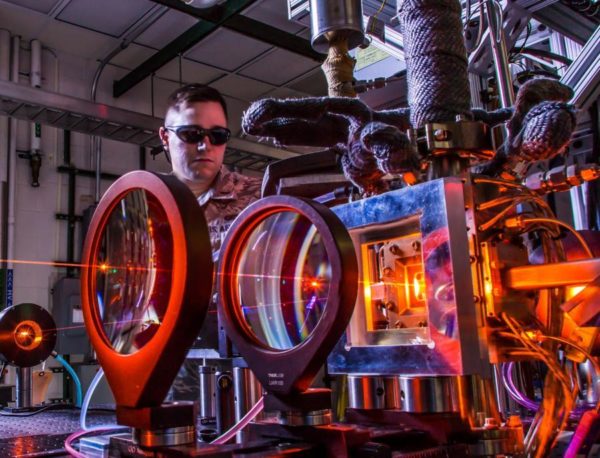 March 25th, 2019 – New Mexico is emerging as a national leader in joint government-industry efforts to modernize the country’s space-based defense systems and build 21st century laser and microwave weapons, and that is creating opportunities for local business.

That includes companies of all sizes, from global players like Raytheon and Northrop Grumman to small homegrown firms and even startups with innovative technologies.

“We’re now widely recognized as a national center of excellence,” Heinrich told the Journal. “It’s positioning us in the coming decades to significantly grow the job base in New Mexico.”

As defense programs grow, more private sector investment is flowing into the state.

“There’s a laundry list of employers setting up shop in Albuquerque, from small, homegrown companies to big guys like Boeing, Raytheon and General Atomics,” Heinrich said. “They all want to be here. They see New Mexico as the place to be now.”

The boom in activity reflects changing national defense strategies, with development of space systems and directed energy among the Pentagon’s top priorities.

New Mexico already excels in that area, thanks largely to Air Force space agencies at Kirtland and the local industry expertise that’s built up alongside it.

On the directed energy front, the military is working to move laser and microwave weapons out of the lab and into the field, with a lot more money going into prototypes for testing, evaluation and training of war fighters. Most of that work is centered in New Mexico because those weapons were largely developed here through the Air Force Research Laboratory’s Directed Energy Directorate, creating a rich pool of talent and technical expertise.

White Sands, meanwhile, is emerging as the nation’s key test and evaluation site for those weapons.

• $484 million for directed energy activities nationally, most of it for Air Force efforts, particularly in New Mexico, to advance laser and microwave systems.

Just since February, the government announced two new awards for homegrown Albuquerque firms. Tau Technologies won an $8.9 million contract for modeling, simulation and assessment work on laser systems, and LoadPath LLC won $14.9 million to assist in research and development of advanced components and systems for satellites.

Big companies are also staffing up to manage new and ongoing space and directed energy-related contracts.

In January, Northrop Grumman said it would open a new Albuquerque-area facility and expand its workforce, potentially doubling its employees to 300 over the next three years.

Boeing, which manages all of its directed energy work in Albuquerque, has developed a ground-based compact laser weapon system for defense against drones. It sold its first ones last year to the Marine Corps for testing and training.

The company, which employs about 200 throughout New Mexico, hired 20 people last year and will hire 20 more this year.

Raytheon as well has ramped up at the Sandia Science and Technology Park to better manage its microwave-related work, nearly doubling its facility there to 175,000-square-feet. The site employs 150 people and includes the largest single concentration of microwave-related scientists and engineers among all companies nationwide, said Don Sullivan, directed energy chief technologist for Raytheon in Albuquerque.

“We’re recruiting more scientists and engineers now, and given our backlog of work, that will continue into the future,” Sullivan said.

Raytheon has built a ground-based microwave defense system to down swarms of incoming drones simultaneously, which it tested at White Sands last fall. If the military deploys the system, most high-tech manufacturing and development will remain in Albuquerque with final assembly elsewhere. That means more jobs at Raytheon and at local high-tech firms that supply components and services to the company, Sullivan said.

“Discussions are ongoing about using our system,” Sullivan said. “There’s potential to actually start producing units in the next two to three years.”

To facilitate those efforts in New Mexico, the AFRL contracted the ABQid business accelerator last year to help it build collaborative relations with private companies. That led to a novel Hyperspace Challenge last fall that paired 10 companies with Air Force specialists in a week-long competition in Albuquerque where participating firms presented data analytics technology that could help the military to rapidly translate reams of satellite data into useful information.

ABQid will help organize another challenge this year looking at a different technology problem.

“We are front and center in defense modernization activities, and it’s creating lots of potential opportunities for businesses here,” Fetrow said. “That includes established companies and startups that can help the Air Force rapidly field new capabilities.”