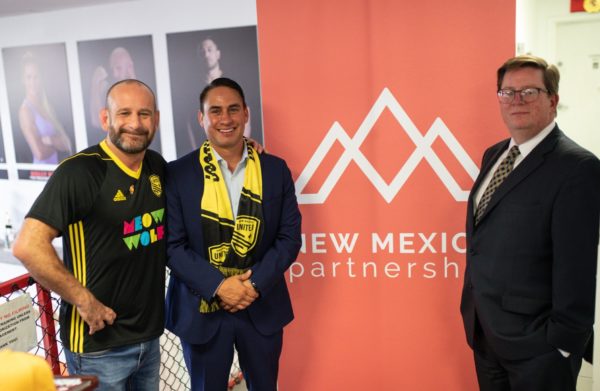 Coach Greg Jackson has a unique platform to showcase New Mexico to the world. His fighters, which include Jon Jones, Holly Holm, Carlos Condit, and over a hundred others, fight at international venues from Australia to Russia, Madison Square Garden to T-Mobile Arena, for UFC, Bellator, Lion Fight and other professional MMA leagues. The fights are highly publicized and televised around the world and Coach Jackson is at the center of it all, and so is New Mexico thanks to Coach’s New Mexico Experience.

“I am extremely humbled, but also extremely excited to have Lt. Governor Howie Morales and the New Mexico Partnership in our corner as we promote all things New Mexico to the world,” said Coach Greg Jackson. “In addition to Jon and Holly, we have a winning team here from across the state in the New Mexico United, Taos Ski Resort, FARMesilla, Real Time Solutions, and the Albuquerque Dukes.”

“As Lt. Governor, my mission is to improve the lives of all New Mexico children and families, and we get there by building a sustainable economy with stronger schools in all of our 33 counties,” Lt. Governor Howie Morales said. “As a coach myself, I know the value of working together to achieve shared goals, and with the New Mexico Partnership and Coach Jackson’s help, we will continue to demonstrate to the world why people should live, learn, play, and invest in New Mexico.”

“Coach Jackson gets it. Coach built his successful business here, and he knows that hundreds of others have also found New Mexico to be the perfect place to build their businesses,” said Tim Nitti, CEO of the New Mexico Partnership. “Partnering with Lt. Governor Morales and Coach Jackson to sell New Mexico together is definitely a winning combination.”

“At New Mexico United we have always talked about making a bigger economic pie by bringing capital and resources into our state. Coach Jackson’s mission is on target!” said owner and CEO of New Mexico United, Peter Trevisani. “We are honored to contribute and be a part of it. I think we are starting to feel a positive shift in New Mexico and this effort will add even more wind to our sails.”

“Taos Ski Valley is very excited to work with Coach Jackson on his efforts to impact New Mexico in such a unique way,” said Dash Hegeman, Director of Marketing at Taos Ski Valley. “His desire to give back to the community directly align with the ethos that we have here at Taos Ski Valley.  We are looking forward to supporting him as he builds upon this initiative to show people what an amazing state New Mexico is and all the fantastic experiences that it has to offer.”

“New Mexico only wins when we all fight together. For a female-owned New Mexico farm to market store, supporting each other is key to building the community we are all a part of,” said FARMesilla owner Shawna Runyon. “Here at FARMesilla, where rural meets urban, we are excited to partner with the New Mexico Experience spreading the word about the exceptional things our state has to offer.”

“As a New Mexico, Hispanic-owned software company, we couldn’t be more excited to catch the attention of the international media to highlight New Mexico’s growing tech economy,” said Chris Schroeder, Real Time Solutions Chief Operating Officer. “We are honored to be a part of the New Mexico Experience and grateful to Lt. Governor Howie Morales, Tim Nitti of the New Mexico Partnership, and Coach Greg Jackson to be able to help sell New Mexico to the world.”

“Since 1915, we’re still here and we’re still cool,” said Albuquerque Dukes owner Steve Palmisano. “We are honored to partner with Coach Jackson, Coach and Lt. Governor Morales, and the New Mexico Partnership to demonstrate to the world why Albuquerque and New Mexico are the best places to build a business with extremely loyal customers.”