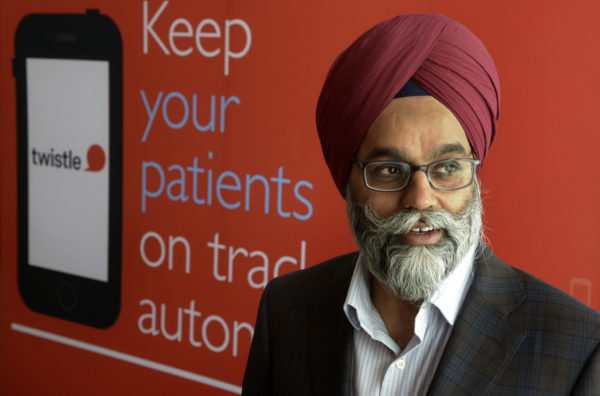 October 30, 2019 – Looking to take control of your health care? There’s an app for that, and it was built by a local company with millions in new funding.

Various investors have contributed a combined $16 million to Duke City startup Twistle, which offers a platform that automates communications, patient education and information gathering for health care systems. Founder and CEO Kulmeet Singh said the system is designed to improve outcomes, lower costs and reduce workload while bridging a gap between providers and patients tasked with at-home care.

“Generally, we are disconnected from our care teams,” Singh said. The firm’s tech aims to engage the multiple organizations that may be involved with one’s treatment — such as doctors, pharmaceutical companies and medical device companies — within one virtual space. It uses various methods of communications including text messaging, interactive voice response and a mobile application, a news release says.

The round was led by New York City-based health care private equity firm Health Enterprise Partners, which invested $7.5 million. Another $3.5 million was invested by the MemorialCare Innovation Fund, owned by California’s MemorialCare Health System, along with $5 million from existing investors, according to Singh.

Health Enterprise Partners Managing Partner Ezra Mehlman said he hopes the investment will accelerate Twistle’s growth and commercialization. The startup already has a lead on other competitors in the space, he added.

With the new funding, Twistle will focus on growing its operations in Albuquerque and Seattle. It will look to add around 25 employees over the next year and a half in both cities. Openings include sales, operations, engineering, data science machine learning and automated intelligence professionals, Singh said. The startup is also in the process of doubling the size of its local office, 4011 Silver Ave. SE, to about 4,000 square feet.

Twistle employs 32, including 13 in Albuquerque and 11 in Seattle.The company has additional offices in Nashville, Tennessee; Washington, D.C.; Chicago; and Indianapolis. It has yet to file the latest investment round with the U.S. Securities and Exchange Commission and has disclosed nearly $2.7 million in investment with the SEC to date. Business First reported on its separate $1.5 million raise in August 2017.

Singh estimated the company will be profitable within two to three years.