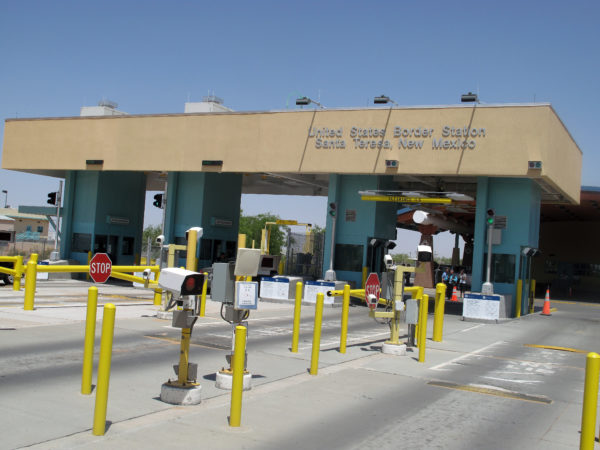 February 25, 2020 – U.S. Sen. Martin Heinrich, D-NM, on Wednesday hosted about a dozen stakeholders in his Las Cruces field office for an update on the Santa Teresa Port of Entry and the port’s role in trade with Mexico.

2019, they said, was a banner year of port — despite being a year of uncertainty revolving around trade relations with Mexico and challenges surrounding the port’s infrastructure and staffing. In 2019, the Santa Teresa Port of Entry saw a 17.4 percent growth in overall trade, with more than $30 billion in imports and exports, according to figures recently released by the U.S. Census Bureau. This was enough to rank Santa Teresa fifth among the nation’s southern ports of entry.

It ranked fourth in exports and sixth in imports.

Jerry Pacheco, president of the Border Industrial Association, said Santa Teresa has benefited from both private and public investment in 2019. The total public sector investment for the Santa Teresa industrial base was about $66 million, he said.

“We’ve got about $181 million in private sector investment, begun or completed in 2019,” Pacheco added. “Right now, we’ve got two buildings under construction. We’ve got Admiral Cable, which is a Taiwanese company. That building is under construction and should be operational by summer. They’ll have three buildings on their lot, and when they’re built out they’ll have about 342 employees. That’s in the Intermodal Park. In the Airport Park, we have Franklin Mountain Industrial. They’re doing a 143,000-square-foot building. Admiral Cable is about a $50 million investment; the spec building by Franklin Mountain is about $9.1 million.”

READ THE FULL ARTICLE AT SUN-NEWS