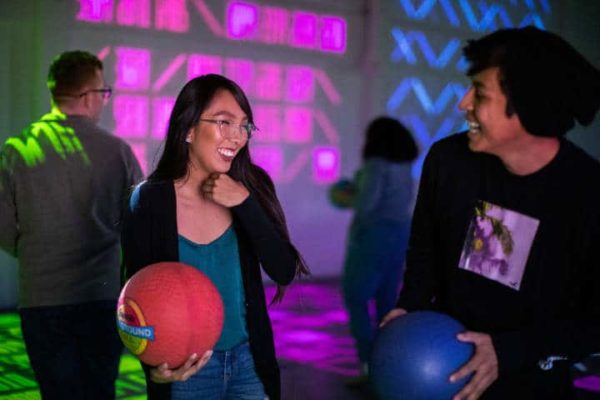 February 10, 2020 – Games first. Electric Playhouse has kept the digital aspect of games but ditched the accessories. There are no screens or headsets. There also were no instructions. This was by design. I spoke with Co-founder and CEO John-Mark Collins after my visit, who told me the games were constructed by the playhouse creative staff for simple engagement. “You either figure it out by playing or by watching someone else play in front of you,” he says.

The point is to engage with other people, part of the mission Collins brought to the entire endeavor as he asked the questions: “How do we get people to start playing all together in the same space having a shared experience? How can we use technology to come back together?”

The quest was formed by both personal and professional observations. As a father of two young daughters, he has watched them drawn solitarily to iPad screens. During several years working for the Corrales-based interactive design company Ideum—in roles that included chief experience officer and executive producer—Collins saw a common problem with technology deployment. “As much as I like the work they’re doing, every time there was a project that could have other solutions, touch screen was the solution.” Collins wanted to evolve away from screens, noting that even in the best-case collaborative experience “you have to all be looking at the screen and not be looking at each other.”

After his time at Ideum, Collins founded Storylab, an interactive experience company. While he had studied art, architecture, business and computer science, his experience in the hospitality industry paved the way for the project that would eventually set the Electric Playhouse in motion: immersive dinners merging fine dining with digital animations and other interactive elements.

Storylab launched with a successful prototype in partnership with Savoy Bar & Grill. The long dinner table accommodating a large group had been designed to accommodate the technology but, in so doing, a happy accident had occurred.

Electric Playhouse, of course, has just opened, but Collins tells me it also plans to develop educational programs. While it has a nighttime component, DJs and a bar, it’s definitely billed as family-friendly, with the games intended for ages 3 and up. The business also has provisional B Corp status, according to its press information, with plans for economic and environmental stewardship, and was built out in a former big box store in one of Albuquerque’s Opportunity Zones, areas where investors in development get tax incentives.