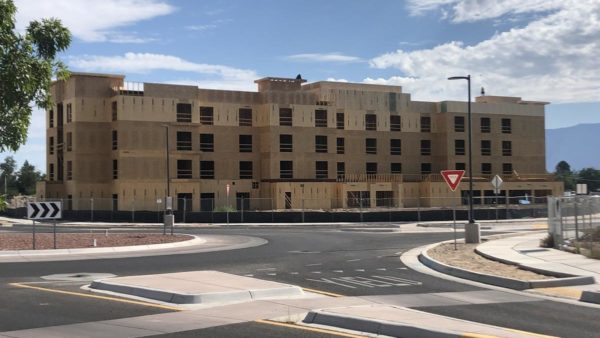 August 2, 2019 – Indian Pueblos Marketing Inc. is in the planning stages for two new big projects at the Indian Pueblo Cultural Center campus, including a 130,000-square-foot Class A office building.

Canfield said the organization plans to start construction on the 130,000-square-foot office building in June on the northeast corner of the Avanyu Plaza North project.

Indian Pueblos Marketing also plans new retail centers totaling 30,000 square feet. Construction on the retail projects is slated to begin in May. No contractor has been named yet for the projects. The center is working on financing the projects.

“We know there’s a need for Class A office space in Albuquerque,” Canfield said, noting the project has already fielded interest from potential tenants. No tenants for the office space or retail centers were named Wednesday.

Canfield said the tens of millions of dollars in planned projects is being spurred by the growth in visitors to the Indian Pueblo Cultural Center.

“On the entire property, activity levels have increased significantly,” he said. “People want to spend time here. We are really becoming a place to spend time and stay.”

The office building and retail centers follow projects already under construction near the 88-acre Indian Pueblo Cultural Center. A 92-room TownePlace Suites by Marriott is set to open in December and the final touches are being completed on the 30,000-square-foot Avanyu Plaza North project, designed by Studio Southwest Architects.

Indian Pueblos Marketing’s second retail phase is expected to break ground in January. That retail expansion, separate from the newly announced retail project, will include 20,000 square feet of restaurant and retail space in three buildings and a 2,000-square-foot security annex. Its first retail phase has been filled by Laguna Burger, a Domino’s Pizza, Sixty-Six Acres by Slate Street Cafe restaurateur Myra Ghattas and the state’s largest Starbucks, which opened in 2015. The security annex building will provide space for officers at the Bureau of Indian Affairs and Albuquerque Police Department. Jade General is the general contractor on the project and Buffalo Design Architects was the project’s architect, both New Mexico based and Native-owned firms.

It also recently completed a $2 million renovation of its Holiday Inn Express & Suites.