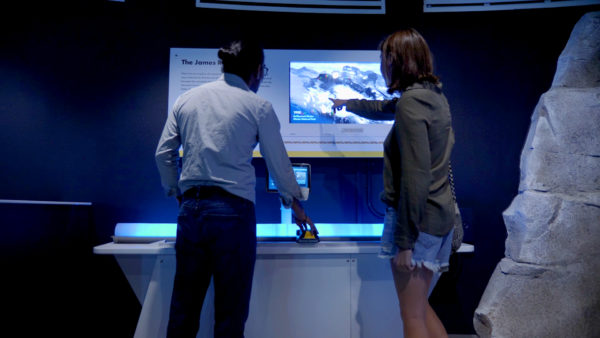 “Our 20th year was our best year ever,” said company founder and CEO Jim Spadaccini. “We reached new milestones.”

That includes record sales in 22 countries of Ideum’s largest multi-touch display tables, the Colossus and Pano units, driving expected revenue for the current fiscal year to $9 million, Spadaccini said. That’s up from $8 million in 2018, and just $1.9 million in 2011, making Ideum a regular stalwart on the Journal’s annual Flying 40 list of fast-growing technology companies.

Ideum, which launched in 1999 in California, moved to Corrales in 2006, where it manufactures all of its interactive digital displays. That includes its namesake interactive touch tables that allow groups of people to simultaneously pull up visual displays and information at the touch of a finger, enhancing museum exhibits or allowing visitors in a building lobby to rapidly access needed information.

Those tables, which come in many sizes with custom-designed displays, are now used in hundreds of museums, research institutions, corporate buildings, and other venues in more than 40 countries.

“We’ve been selling bigger units and a lot more large and small custom-designed ones,” Spadaccini said. “Business is growing particularly fast for the video projection walls.”

The company designed and built all the immersive displays at the Albuquerque BioPark’s new Penguin Chill exhibit, which opened last July. It features six interactive exhibits, including a dynamic light sculpture that simulates the aurora australis, or Southern Hemisphere lights. That ceiling display is connected to live solar activity data to continuously change colors as they would in real life.

Ideum achieved another major milestone in December, when it finish installing its biggest multitouch table display to date: a 21-foot, marble-clad, 5,500-pound table able to accommodate 20 users simultaneously. It now occupies the lobby of a Fortune 500 company’s training facility.

The company also completed another display in December for the Smithsonian National Museum of African Art in Washington, D.C., the fifth Smithsonian project it has done to date.

And Ideum is again expanding its facilities in Corrales, where it currently occupies 22,000-square-feet in a four-building office park on the Village’s south side. It will acquire another 3,000 square feet there, giving it more than 30,000 square feet after including the 6,000-square-foot fabrication facility it opened in 2018 near Corrales City Hall. That’s up from just 1,600 square feet it occupied when it arrived in Corrales.

The company currently employs 48 people, and expects to hire another 10 this year.