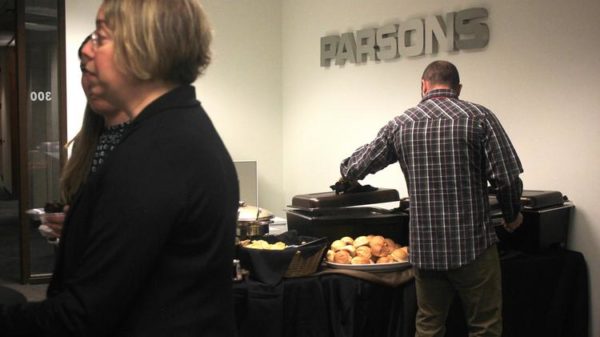 March 5th, 2019 – International tech and engineering giant Parsons Corp. opened its New Mexico headquarters Wednesday, prepping for major growth in the coming years.
Regional Business Director Lee Williams, who will oversee the Albuquerque-based facility, said Parsons has identified the Duke City as a top market in the region. The facility houses room for 18 employees, and the company is planning on expanding its local footprint as it lands more government work. The company has around 15 employees working at Kirtland Air Force Base at this time, he said.
“We want people to know that we’re in Albuquerque to stay,” Williams said, adding that it was too early to provide estimates on the total number of people Parsons will employ locally.
Parsons’ new 2,700-square-foot corporate office is located at 5051 Journal Center Blvd. NE. The deal was brokered by Colliers International Senior Vice President and Principals Tim With, Keith Bandoni and John Ransom, senior vice president and chairman. The firm’s lease spans four years, according to Bandoni.
Williams said Parsons wants to invest in New Mexico by subcontracting locally owned firms. He said Parsons is looking to forge partnerships through the Department of Defense’s Mentor-Protégé Program, and is in talks with various New Mexico companies.
Partnering with major firms can be beneficial for small companies looking for new projects, as larger organizations often have a wider array of capabilities that can be taken advantage of.
Parsons, based in Centreville, Virginia, has over 100 locations and does business in 25 countries. The company describes itself as a technology-driven engineering services firm working in many markets, with a focus on the infrastructure, defense, security, and construction fields. Williams said Parsons has around 18,000 employees.
The company reported $3 billion in revenue in 2017.