By Alison Flood, The Guardian 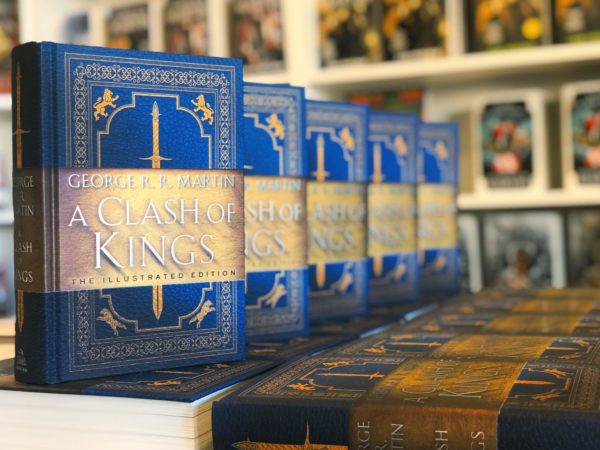 December 17, 2019 – George RR Martin has opened a bookshop in Santa Fe, New Mexico – although it isn’t, as yet, stocking his long-awaited novel The Winds of Winter.

The Song of Ice and Fire novelist, who acquired the Jean Cocteau Cinema in Santa Fe in 2013, has now opened the Beastly Books store next door. The shop is named in honour of what Martin said was Cocteau’s most famous film, Beauty and the Beast, as well as “a certain TV show I worked on in the 80s” with the same name.

Martin said that he and his team decided to open the shop after hosting talks and signings from “dozens of terrific, award-winning, bestselling writers” at the cinema. “All of them have signed stock for us. The only problem was the Jean Cocteau lobby was far too small for us to display all of these wonderful autographed books,” he wrote on his blog. “With that in mind … we opened our own bookshop right next to the theatre … Do come by and visit us the next time you come to the Land of Enchantment. Beastly Books. Hear us roar!”

Beastly Books will also play host to a huge stock of signed copies of Martin’s own books, he promised. What it doesn’t sell – at least for now – is The Winds of Winter, the sixth novel in A Song of Ice and Fire, his fantasy sequence on which HBO’s Game of Thrones is based. Martin has promised the book will be done by next summer, when he visits New Zealand for WorldCon, the science fiction and fantasy convention.

Martin is not the only major author to own his own bookshop. Ann Patchett opened Parnassus Books in Nashville, Tennessee in 2011, Judy Blume opened a small, non-profit bookshop in Key West, Florida in 2016 and Louise Erdrich owns Birchbark Books in Minneapolis.

READ THE ORIGINAL ARTICLE AT THE GUARDIAN