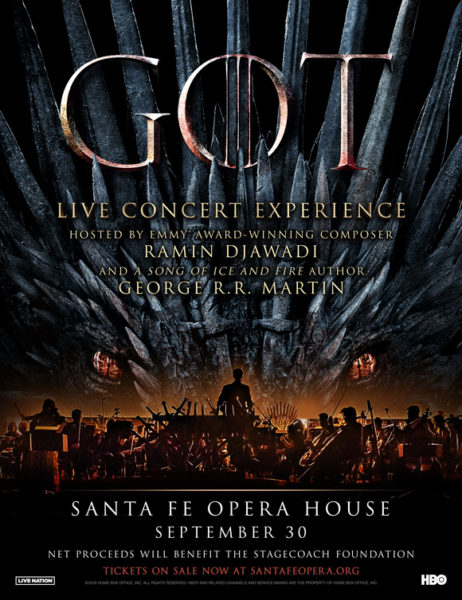 On Sept. 30, the “Game of Thrones Live Concert Experience” will take the stage at the Santa Fe Opera.

The critically acclaimed show returns this fall for a 20-city tour, bringing the music of Emmy Award-winning “Game of Thrones” composer Ramin Djawadi to stunning new life across North America.

Tickets for the tour will be available at ticketmaster.com at 10 a.m. Friday. A presale begins today at 10 a.m. for Citi Card holders.

The concert in Santa Fe will be a benefit for The Stagecoach Foundation. The show will be hosted by Djawadi and Santa Fe resident and “Game of Thrones” author George R.R. Martin.

It provides free experiential learning opportunities for youth, young adults, and life-long learners in an array of focuses.

The show was first conceptualized several years ago and Djawadi will be reworking and redeveloping the musical and visual elements of the concert to create a brand new live experience that encompasses fan-favorite pieces from the entirety of “Game of Thrones.”

According to a news release, the tour will include new musical arrangements from the series’ eighth and final season such as the “The Night King” theme, Djawadi’s epic 9-minute composition that went viral immediately after debuting on the show.

Within days, the track garnered millions of streams across the Internet, reached the top four most downloaded songs on iTunes and the top 18 most watched videos on YouTube.

The tour will continue to use innovative music tour production and video technology that will recreate the various realms found throughout Westeros and Essos as well as showcase footage from the series in addition to new imagery created exclusively for the concert.

Djawadi has won one Emmy and been nominated for six Emmys and two Grammys.

Versatility has defined his career, from celebrated television scores for “Game of Thrones,” “Westworld,” “Jack Ryan” and “Prison Break” to feature films such as “A Wrinkle in Time,” “Mountain Between Us,” “Slender Man,” “The Great Wall,” “Pacific Rim,” “Iron Man” and “Clash of the Titans.”