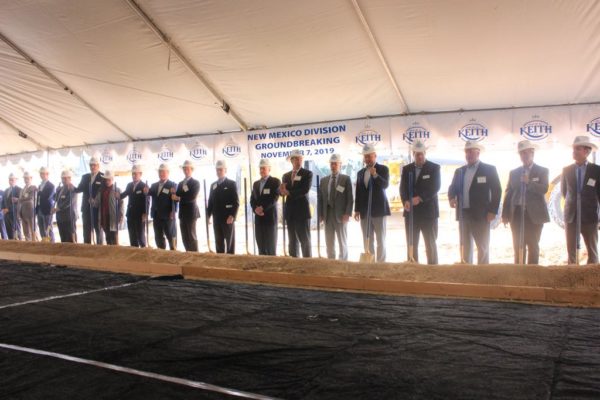 November 13, 2019 – After more than 20 years, phase two of Ben E. Keith’s presence in Albuquerque is underway.

Hundreds gathered Thursday under a canopy tent on the Westside to celebrate the groundbreaking of Ben E. Keith’s new regional headquarters. Several elected officials from the city of Albuquerque and Bernalillo County spoke about new job creation and development in an area near Unser Boulevard and Interstate 40 that they said is underserved for jobs.

Texas-based food and beverage distributor Ben E. Keith is using Wisconsin-based ESI Constructors for the build-out of its 261,000-square-foot warehouse and office facility at 601 Gallatin Place NW, with the ability to expand on the new campus. Last month, the Albuquerque City Council unanimously passed a motion to change the name of Gallatin Place NW to Ben E. Keith Way between Fortuna and Los Volcanes roads, where the facility will be located. The project is expected to be finished and fully functional between December 2020 and February 2021.

“This is a big deal for us,” said Mike Sweet, president of Ben E. Keith. “These shovels that are about to go into the ground [are] phase two of a very bright future in New Mexico for the Ben E. Keith company.”

Bernalillo County unanimously approved an $80 million industrial revenue bond for Ben E. Keith in October 2018 for the construction, equipment purchase and land acquisition of its new regional headquarters, which will serve the Land of Enchantment, El Paso and southern Colorado markets.

Along with the new headquarters, Ben E. Keith will add 93 jobs to its local workforce.