Finding Your Way to Santa Fe

By Chris Nelson, For The Calgary Herald 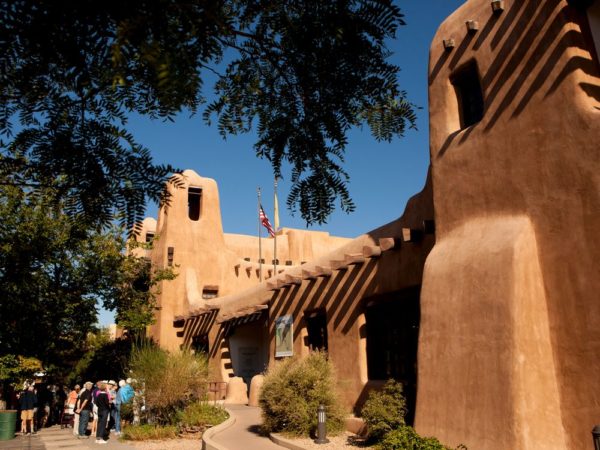 July 8, 2019 – For many hundreds of years, Indigenous tribes had made the Sante Fe area their home and then, 400 years ago, the Spanish arrived — the words Santa Fe translate into Holy Faith — and decided to make this exact spot their permanent base, a move that would eventually lead to it being designated the oldest existing capital city in the United States.

For Canadians who have made the drive into Taos, before them is the lure of a leisurely, spectacular drive of about two hours to Santa Fe. There are two routes, the low road and the high one. The latter, with its twists and turns amid semi-desert scenery against a backdrop of magnificent mountains, is the much better path to follow. But do it during daylight hours: the black of night isn’t the time to test your driving prowess on this road.

It doesn’t take long to see why so many folk have wanted to come to Santa Fe — though the city remains cozy and intimate with a population well below the 100,000 mark. The lure for both the practitioner and the connoisseur is art, in all its wonderful glory and variety. The city abounds with galleries and workshops displaying everything imaginable: from local crafts and Indigenous Southwestern work to contemporary and experimental offerings.

And for those who don’t want to buy but instead simply gawk at the collected best of Santa Fe’s passion — the city was recently voted one of the world’s best for arts and culture — there are a handful of quite wonderful museums. Among the best is the Museum of International Folk Art, the Wheelwright Museum of the American Indian and the Museum of Contemporary Native Arts, all clustered together on Museum Hill on the edge of the city.

Then, of course, there’s the mother of American modernism, Georgia O’Keeffe. O’Keeffe, who died in Santa Fe at age 98, was famous for her New Mexican landscapes. A few years ago, her Jimson Weed work — a plant she discovered in her Abiquiu garden, sold for $44 million, easily becoming the highest price ever paid for a work by a female artist.

From Santa Fe, it’s a pleasant day trip to see her former home in Abiquiu or easier still is a visit to the Georgia O’Keeffe Museum — where Jimson Weed/White Flower No. 1 once hung — near the central plaza. Like much of Santa Fe itself, the museum has become a place of pilgrimage for art lovers from across the world. But be warned: some who arrive, like O’Keeffe, decide never to leave.

READ THE FULL ARTICLE AT THE CALGARY HERALD