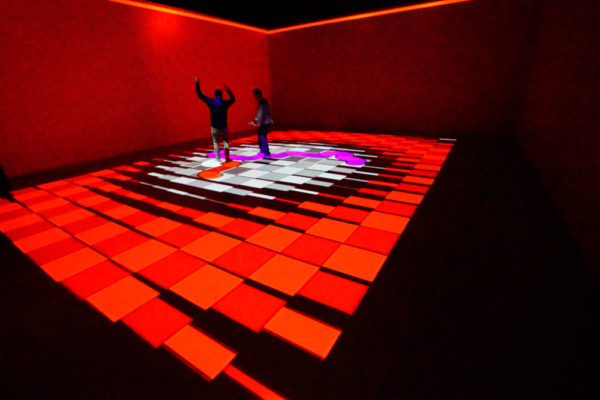 The West Side recreation spot the creators are calling an “interactive projection gaming complex” will officially open its doors to the public Feb. 1. It will feature two dining areas, a full bar with local beers and interactive gaming spaces.

CEO and founder John-Mark Collins, who has a background in hospitality, software engineering, and art, said the idea grew from his interest in making software more interactive.

“I wanted to get people off the small screen and being more social,” he said. “I wanted to take something that is familiar, technology, and augment it.”

The space uses projectors and motion sensors to track someone’s location in the room and the movement of their body. From this starting point, Collins built games around movement of the entire body or certain limbs. The whole room becomes part of the gaming experience.

One game entails throwing a ball at a projected image on the wall while another one has participants standing on a dot and trying to stay on it as it moves. As the game progresses, the dot moves faster and closer to other participants and their dots. Many of the games will pit players against one another. There is a game similar to air hockey where participants have to kick a dot around on the floor and make it into their goal. A room at the back will have mirrors on all the walls, the ceiling and the floor and will feature images from various artists. The first few months will be two artists who specialize in fractals. One of the spaces will sometimes be used for a DJ on the weekends.

“What we want people to understand is that this is not the stuff with goggles,” he said. “You walk in and you are unencumbered. You are not confined to a screen and you don’t have to put on awkward equipment.”

Collins said he hopes to have at least 30 games before the grand opening and they will continue to develop more.

Attendees can enjoy the café from the lobby or inside the gaming area. It has a bright spotfull bar and offers a selection of salad, burgers, sandwiches and pizza. Private bookings are available for the three dinning rooms, which seat 24 people each. The walls and long, rectangular dinning tables change from one digital image to another, which in real life would be the equivalent of changing tablecloths but this is done with the touch of a button. Moving across the table are digital images of different wildlife including butterflies and sea life that appears to be swimming through water.

The playhouse is located near the intersection of Coors and Interstate 40 at 5201 Ouray Road NW in a building that was once a Staples store. Beginning Feb. 1, it will be open from 10 a.m. to 10 p.m. Tuesday through Thursday and on Sundays, and 10 a.m. to midnight on Friday and Saturday. They are closed Monday. Entrance fees are based on age and give attendees unlimited play time for now. Feins said during busier times throughout the year, they may have to do sessions to accommodate the crowds.