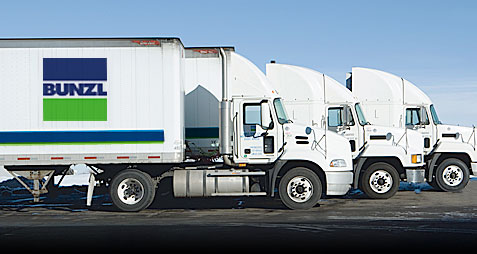 July 1, 2019 – International distributor Bunzl Distribution USA is planning a major Albuquerque expansion and has signed a “long-term” lease for a new building under construction at the site of the former FedEx Freight facility.

The company, a distributor of food packaging, supplies and cleaning and safety products, will relocate to a newly constructed 80,000-square-foot facility, 7601 Los Volcanes Road NW. The plant will be nearly double the size of its previous one. Operations Manager Adam Longbotham confirmed the deal.

The warehouse, which will include a total of 140,000 square feet, is being developed and constructed by Albuquerque’s Brunacini Development. It is slated for completion in October and the space unoccupied by Bunzl Distribution is available for lease. Construction began in March.

As part of the project, Brunacini tore down most of the old FedEx Freight building that previously stood on the 22-acre plot of land and is replacing it with the larger structure. FedEx, which recently opened a larger facility on the Westside, was reportedly paying $2 million in monthly rent for the former facility.

Bunzl Distribution USA, headquartered out of St. Louis, Missouri, employs 25 in Albuquerque. It distributes products to food processors, supermarkets, non-food retailers and convenience stores and is a division of London-based Bunzl PLC. The subsidiary owns over 100 warehouses serving all U.S. states, Puerto Rico, Canada, the Caribbean and Mexico. Worldwide sales for the company exceeded $10 billion, according to its website. Longbotham said he was unable to discuss hiring plans.

Bunzl’s current facility is located at 7300 Meridian Pl. NE. It has occupied the space for 15 years, Brunacini said.

Johnson Commercial Real Estate broker Erick Johnson represented Brunacini on the transaction, and Bunzl by NAI Maestas & Ward brokers Jim Wible and Keith Meyer. Johnson said the lease is “long-term” but declined to disclose further details, including how much it is worth.

International brokerage Cushman & Wakefield also worked on the deal for Bunzl, Meyer said. A representative for the Chicago-based firm was unavailable for immediate comment.