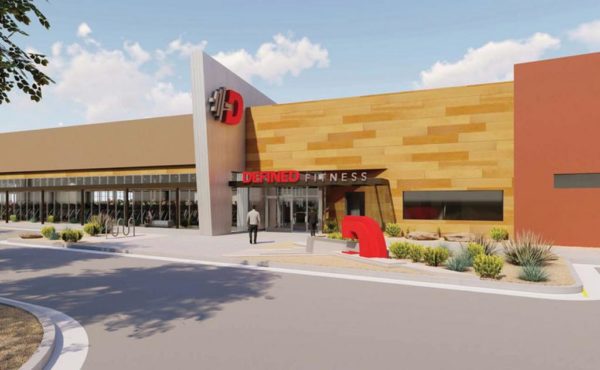 July 25, 2019 – Defined Fitness is continuing to bulk up its Rio Rancho presence.

The New Mexico-based gym announced two 40,000-square-foot new gyms in the City of Vision on Wednesday: one on the northern side of the Rio Rancho at Enchanted Hills and another at Hilltop Plaza. The Hilltop Plaza is set to replace its existing Ridge Rock location, said Maria Lamar, director of marketing for Defined. The Enchanted Hills location is scheduled to open in early 2020 and the Hilltop Plaza location is set to open later in 2020, according to a release.

Defined’s new locations are set to feature amenities such as small group training, indoor and outdoor training spaces, recovery rooms with hydro massage beds, athletic training and a pool with saunas, and more, according to a release.

The fitness club broke ground on its 40,000-square-foot Central and Unser location in February, which is expected to open in November. The Nuevo Atrisco mixed-use development project at the same intersection broke ground in April. Defined also is renovating its Coors and Montano location, which will be completed in September. The company said it spent about $250,000 to update the club.

Defined announced its first Santa Fe location last November, with its opening date scheduled for December, according to its website. Defined previously said it wants to open five new locations and create over 500 new jobs in the state and is also investing $1 million in each of its existing clubs.

“Over 30 years Defined Fitness has stayed committed to New Mexico and these announcements reinforce that commitment,” Lamar said in a statement. “By expanding our footprint west of the river, we’re telling our community that we are everywhere, and will continue to look for opportunities to locate clubs where our members live, work and play.”