‘Dawn of a New Space Age’ 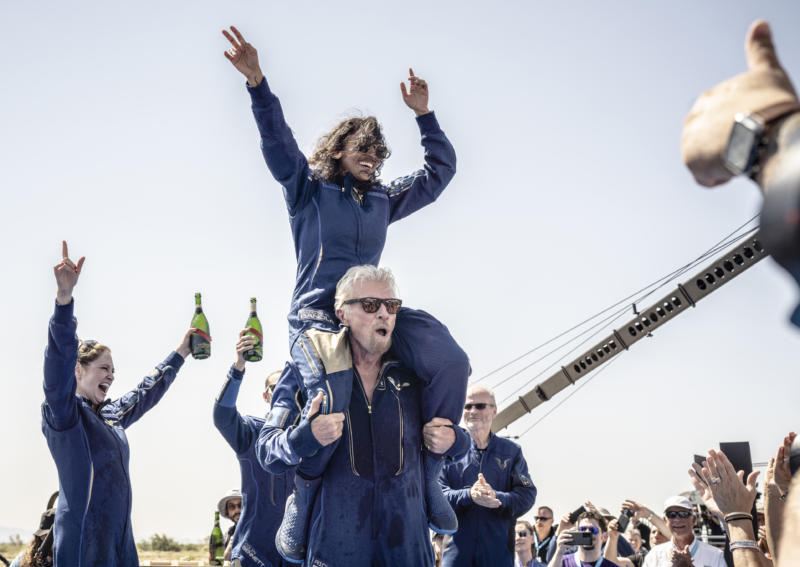 July 11th, 2021 – New Mexico took center stage Sunday when Sir Richard Branson made history with his successful flight from Spaceport America to the edge of space aboard his own passenger rocket ship.

Virgin Galactic’s VSS Unity took off from the spaceport about 8:40 a.m. attached to the underbelly of the company’s mothership, VMS Eve, with Branson, two pilots and three other crew members strapped in the cabin. About 45 minutes later, the rocket broke away from Eve, fired up its motors, and shot into space, reaching about 282,000 feet, or nearly 54 miles up.

The Unity accelerated to three times the speed of sound before reaching space, where Branson and the cabin crew floated in microgravity for about three minutes while taking in spectacular views of the Earth’s curvature below.

The Unity then gently descended back to Earth, gliding through the skies above the New Mexico desert before landing safely on the spaceport runway about 9:40 a.m.

Soon after, Branson and the other crew members climbed on a stage set up on the tarmac to share his experience with hundreds of invited guests and reporters from across the globe who traveled to the spaceport to observe Virgin Galactic’s first fully crewed passenger flight. Branson called it a “magical” experience.

“I’ve dreamt of this moment since I was a kid,” Branson said. “But honestly, nothing can prepare you for it.”

In a subsequent news conference with local, national and international reporters, Branson said the flight surpassed his “wildest dreams.”

“It’s impossible to describe what it’s like going to Mach 3 in seven or eight seconds,” Branson said. “As you go into space, the views are breathtaking.”

And the experience in microgravity?

“I unbuckle and the next thing I’m seeing are three people floating below me,” Branson said. “I’ll never be able to do it justice. It’s indescribably beautiful.”

“This is a morning we’ll remember for the rest of our lives,” Colglazier told launch attendees. “It’s been years in the making.”

Branson also announced a Virgin spaceflight sweepstakes Sunday, the winner of which will get a personal tour of Spaceport America led by Branson himself, and two tickets to fly to space.

“Welcome to the dawn of a new space age,” Branson said to cheers.