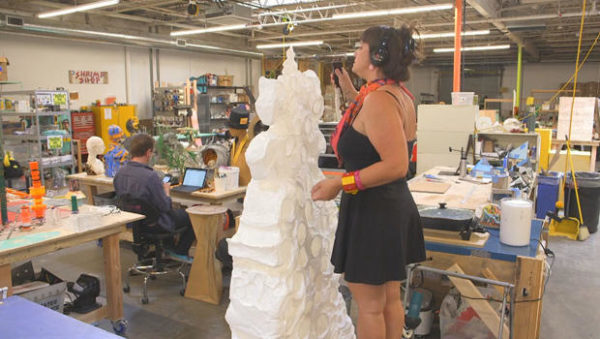 November 5, 2019 – Santa Fe, New Mexico is the third-largest art market in the country. The town is home to more than 250 art galleries and dealers, although there tends to be a common theme. Let’s just say there’s no shortage of options when it comes to buying turquoise jewelry or scenes of sunsets and cowboys and cacti.

But, five miles away from the historic town square, there’s an art experience unlike any gallery you’ve ever seen before.

“The House of Eternal Return” begins with what looks like – a house, an old Victorian. But something isn’t quite right inside. Step through the refrigerator, and you step into a whole different dimension.

“Imagine it being, like, sci-fi novel, but instead of reading it on the page you can actually walk inside of it, and you can explore it,” said Vince Kadlubek, a co-founder of Meow Wolf, the Santa Fe-based arts collective responsible for this immersive experience, a 20,000-square-foot exhibition space that contains everything from a musical mushroom forest to a neon Mastodon rib cage.

Today, Meow Wolf is raking in millions of dollars. But when the group first formed in 2008, they were just a bunch of rowdy Santa Fe art punks. Kadlubek said, “We’re 20-somethings, we’re punks, we’re millennials, we’re loud, we’re grungy. You know, we’re all these characteristics that didn’t fit with the Santa Fe gallery style.”

Shut out of the Santa Fe scene, Kadlubek and his friends decided to start throwing their own art parties and shows, filling every available space with their work.

Their process of choosing a name was as haphazard as their style: “We came up with it by putting a bunch of words in one hat, and a bunch of words in another hat, and then just kind of, like, pulling words out and connecting them,” Kadlubek said. “And Meow Wolf was the one that we settled on.”

“So, it could have just as easily been, like, Meow Chair?” asked correspondent Conor Knighton. “Light Bulb Wolf or something?”

Eventually, Meow Wolf started to make a name for themselves in Santa Fe. Their temporary exhibitions were so popular, the group decided they needed a bigger, more permanent space. They found an abandoned bowling alley that just might do the trick, but they didn’t have anywhere close to enough money to buy it. Luckily, there was one guy in town who did.

Kadlubek said, “We created, sort of like, a back-of-the-napkin business plan, and we presented it to George R.R. Martin, the author of ‘Game of Thrones.'”

Yes, the creator of Game of Thrones bought a bowling alley!

“The House of Eternal Return” has become one of Santa Fe’s most popular attractions. It’s art for people who might not otherwise want to go to a gallery.

Visitors are not given a map: “It’s so important, I mean, giving audiences the opportunity to be scientists, to be explorers, to discover things on their own. That’s what creates personal experience,” Kadlubek said.

Meow Wolf has also been creating jobs. The group now employs more than 300 full-time artists who are working on crafting pieces for new Meow Wolf installations. The group is opening a space in Las Vegas next year, and in Denver in 2021.

For New Mexico creatives like Elena Schwartz and Mikey Ray, a gig with Meow Wolf offers a rare bit of artistic stability; it offers insurance.

“I feel incredibly lucky,” Schwartz said. “Before this job, I was a full-time artist during the day, and full-time server and bartender in the evenings. So, never did I think I would have a salary position getting to create beautiful art with a team of other creative people.”

Ray laughed, “I feel a chill in my spine to think: I have dental, you know?”

This kind of team effort does mean sacrificing some individual glory, but in exchange, the group has been able to create an experience that is quite literally larger than any one person.