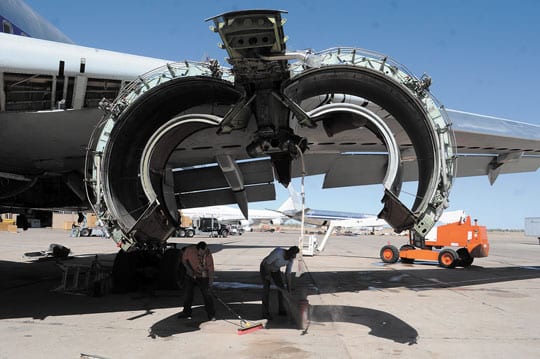 January 30, 2020 – An aircraft service and dismantling business with an operation in Roswell plans to hire more people and has received state funding to help pay for training.

CAVU Aerospace Inc. has been given $527,054 in Job Training Incentive Program funds through the New Mexico Economic Development Department to train 37 people for jobs at its Roswell Air Center location.

Of the total, $525,304 is for wage reimbursements and the remaining amount is an audit fee.

One of the owners of the business did not respond to emails or calls by press time. According to a document provided from the EDD, the company is planning to add two maintenance lines for an existing customer with ERJ-190 aircraft. That customer is also planning to store more aircraft in Roswell, the document indicates. Additional customers also might be expanding their use of Roswell services, the company has indicated.

CAVU, a privately owned business founded in 2010, has its headquarters in Stuttgard, Arkansas, and also has operations in Victorville, California, and Goodyear, Arizona. Its Roswell business began in 2012 and now involves about 26 employees.

CAVU is accredited by the Federal Aviation Administration as a maintenance, repair and inspection business for aircraft and aircraft parts (known as a Part 145 business).

According to the EDD, the job training funding decisions were made at a Jan. 10 meeting of the JTIP board, which awarded a total of $2.7 million to reimburse wages for 366 employees and interns at 11 companies in New Mexico.

Created in 1972 by the New Mexico Legislature, the JTIP program will reimburse 50% to 75% of employee wages for classroom and on-the-job training for up to six months.